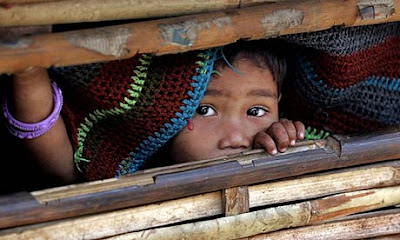 The small Himalayan kingdom of Bhutan is hailed as the last Shangri-la in a region plagued by conflict and poverty. Attracted by its policy of Gross National Happiness, Western media have held up the country's apparently peaceful transition to democracy as a model of wise governance by a Buddhist regime protecting its culture from the ravages of consumerism.

But behind its facade of otherworldly charm, Bhutan holds a secret. Twenty years ago, its monarchy, threatened by an increase in Bhutan's ethnic Nepalese population, hit on a simple solution: ethnic cleansing. Families who had been living in Bhutan for generations were stripped of their citizenship. One hundred thousand Hindu Bhutanese - around one sixth of the country's entire population - were driven into exile and their land redistributed among the Drukpas, Bhutan's Buddhist elite.

Now a combination of divisions among the refugees, renewed tension inside Bhutan and the surprise election victory by Maoists in Nepal, is threatening a plan that finally gives hope to 107,000 refugees who have been languishing in camps in eastern Nepal for the last 17 years. Tens of thousands of unregistered refugees are living stateless and in abject poverty in Nepal and India.

There are also fears among exiled Bhutanese leaders that a new wave of expulsions from the remaining ethnic Nepalese population, called Lhotshampas, is imminent. 'The process is happening already,' said Ratan Gazmere, a leading human rights activist and a refugee himself. 'But I cannot convince the international community of that.'

Gazmere, who was tortured and jailed for two years in the capital Thimpu, said widespread discrimination continues inside the country.

Lhotshampas are denied education and in the last census, held in 2005, around 13 per cent of the whole population of Bhutan, most of them Nepalese, were classified as 'non-nationals'. As a result, 82,000 Bhutanese were denied a vote in last month's first-ever general election. Non-nationals, lacking an identity card, are not allowed freedom of movement or to start a business.

Paradoxically, it is a potential solution to the crisis that seems to have tipped the Lhotshampa community into fresh uncertainty. In 2006, with the international community facing an apparently endless bill for maintaining the refugee camps, an agreement was reached whereby some refugees would be resettled in the West while others would stay in Nepal and pressure would be brought on the Bhutanese government to allow others to return.

The US assistant secretary of state Ellen Sauerbrey said her country would offer citizenship to 60,000 of the refugees. Other countries, including Canada, have stepped in with similar offers.

With the prospect of around half of the refugees leaving the camps, leaders fear pressure on Bhutan to allow the rest home will evaporate. Put simply, they say, the government of Bhutan will be rewarded for its ethnic cleansing.

Extremists in the camps, including a new Maoist organisation, have allegedly threatened refugees not to apply to leave for the US. Gazmere echoes human rights groups who say refugees must be allowed to make up their own minds. 'My concern is that the refugees should not suffer more than they already have,' he said.

Disaffected young Lhotshampas who have grown up in the camps or suffered discrimination in southern Bhutan are turning to violence. Several bombs exploded in Bhutan in January, including one in Thimpu. Although no one was killed, the escalation resulted in Bhutanese security forces shooting dead five men they described as Maoists.

Now Bhutanese leaders in exile are adjusting to the prospect of a Maoist government in Katmandu that may not welcome what it regards as American interference in the region. The US still classifies the Maoists as a terrorist organisation.

'The Maoists will try to destabilise the resettlement process,' said Gazmere, 'because Americans are involved.' Other Bhutanese leaders disagreed, arguing that Maoist leaders in Nepal have warned them not to expect support.

The question remains how Bhutan got away with such a large-scale expulsion of its own citizens. A recent report by the Norwegian Refugee Council blames the world's media for helping 'perpetuate the myth of an exotic land of happiness. However, what we have before us is a silent tragedy occurring in a media-created Shangri-la.'

Ratan Gazmere said Bhutan's close relationship with India was critical. India had shielded Bhutan in return for access to hydro-power and timber.The Bhutanese had shut down camps in the south hat were used by the United Liberation Front of Assam to launch attacks across the border. 'India doesn't want to push Bhutan too hard,' Gazmere said.
Posted by Oh My GOD at 9:49 PM