From a Paro resort to the national stage 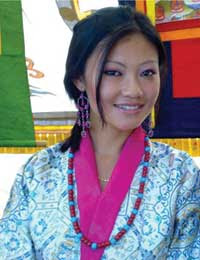 19 August, 2010 - She is slim, tall, beautiful and an upcoming star in today’s Bhutanese cinema. At just 22, Tandin Bidha, the young actress has already acted in seven movies, has another three in store, acted with veteran stars and has been nominated for best supporting actress for the national film awards.

The cheerful actress from Paro has always been into acting. “I was always passionate about joining the film industry although I didn’t have any professional training,” she said.

Her interest and acting skills were showcased in the many plays and skits she participated in as a student in school. “I’ve played a number of roles and in different capacities,” she said.

Later, she was introduced to the Bhutanese audience as a lead actor by Talop Wangchuk in his movie ‘Ya Ma So’. She said. “I can never forget this in my entire life.”

“I know I belong in the film industry,” she said. “The best part of being an actress is you become responsible for a character you play in a movie.”

Vivid, young and energetic, the actress reveals she wants to be known as a versatile actress by the people, when she her days as an actress is over. “I’d love to be the sweet girl next door and also a hard core fighter but always with decent role,” she laughs. “But that doesn’t mean I am choosy. As long as the script is good, I don’t mind playing anyone dramatic in the movie.”

While she says she is not choosy, she prefers roles where she does not have to cry a lot.

She considers herself a responsible daughter and an actress. She’d like to be able to inspire people through her roles. “I can now advise people and family and they actually listen to me,” she laughs.

At home, Tandin is helping her father with his business. “I’m looking after my families’ resort in Paro whenever I don’t have a tight schedule,” she said.

Tandin said her life has changed ever since she joined the cinema world. Being once known only as Tandin Bidha in her corner of Paro, she has a nationwide fan following now that appreciates her. “I’m proud of myself because now they like me and I have thousands of fans,” she said. She derives her inspiration from all deserving actors and actresses in Bhutan.

The young merry actress thanks all her friends, who always encouraged her to become an actress; and who believed she was born talented. Before signing out, she stops to say that the film industry needs more intellectual and highly professional talents, so everyone must take a chance. “Passionate, interest and high determination is all you should have to become an actress,” she stops.

Yangchen C Dorji
Posted by Oh My GOD at 6:40 AM