Purity of gene pool goes down with the hybrid process

The Golden Langur29 August, 2010 - The endangered golden langur (trachypithecus geei), which is native to Bhutan and some parts of the neighbouring Indian state of Assam, could be under threat of extinction from crossbreeding with the capped langur, according to a Bhutanese researcher.

“The crossbred offsprings are very fertile and can produce further offsprings easily and that could erase the golden langur species,” said Dr Tashi Wangchuk who has studied the conservation of golden and capped langurs in Bhutan. “The golden and capped langurs hybridise naturally in areas between the Dunmang tshachu in Zhemgang and Riotala (near Kartigangchu) in Trongsa.” 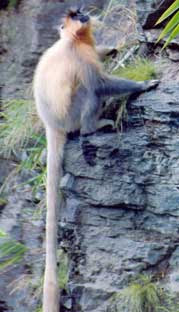 “The hybrid process could probably be due to human settlement,” said Dr Tashi. “After settling, people started building bridges across the Chamkhar river, where the langurs used those bridges to cross to the other side and grouped together,” he said. “Earlier, the river acted as a barrier.”

The capped langur traits (black colour) are more dominant than golden traits (gold colour) and the phylogenetic (study of the closeness/relatedness of genetic codes) clearly shows that male capped langur are the ones moving into golden langur troops and siring the hybrid offsprings,” states Dr Tashi Wangchuk’s report, which was submitted to the critical ecosystem partnership fund (CEPF) that funded the research. “Because of this, golden langur could disappear as a distinct species,” his report states. 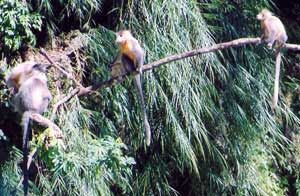 Dr Tashi said the hybridisation process cannot be stopped, unless all four bridges across the river are removed but that, he said, was not practical. “Therefore, necessary monitoring at the hybrid zone, study on the stability of the zone should be done,” he said.

“Keeping guard at the bridges could also reduce the problem,” he added. There are about 4,000 golden langurs in the wild in Bhutan and about 1,000 in Assam.

The golden langur with a very restricted range is confined to western Assam in India and Bhutan only. However, because of deforestation, occasional poaching and loss of habitat in Assam, Bhutan has become the last bastion for their survival as a species, according to the researcher.

Dr Tashi Wangchuk has recommended further research to assess the extinction threat to golden langurs from hybridisation with capped langurs as “genetic introgressions tests can provide more definitive answers, which are easily quantifiable and measurable, rather than visual colour observations”.

But he also cautions that other conservation threats to golden langurs have not diminished.

The Gonphu-Panbang highway being built through the royal Manas national park will open up the area to large scale development. The planned mega hydro projects along the Mangdechu and Chamkharchu degrade the habitat of langurs from “near pristine” to “at risk”, his paper states. “It’s important to keep in mind that there are fewer than 4,000 golden langurs left in the wild, and the present rate of development and habitat loss and alteration could result in the gradual loss of the species over the next 50 years.”

By Tandin
kuensel
Posted by Oh My GOD at 6:09 AM