14 September 2010
By RK Dorji
I was arrested in 1997 by the Government of India at the behest of Royal Government of Bhutan in Delhi. I was imprisoned for 14 months at Tihar jail. On 12 June, 1998, I was released on bail by the Delhi High Court. However, my bail conditions required that I had to report to the local police station twice a week and I couldn’t go out of Delhi. My arrest itself was against Indian law. I was booked for not posessing valid travel documents. In fact, at the time of my arrest, I had a valid travel document issued to me by the Government of Nepal. In addition, the Indo-Bhutan Friendship Treaty of 1949 doesn’t require Bhutanese citizens to have visa or travel permit to travel to India.
Despite politically fabricated and motivated charges against me, the extradition proceedings dragged on. The positive side to all the misery that I was subjected to was the assurance of the Indian democratic spirit and the rights of individual finally prevail when the Government of India dropped the extraditions case against me on April 21 of this year.
After the end to a torturous judicial journey of 13 years, the Indo-Bhutan Friendship Society, an organisation promoting friendly ties between the people of Bhutan and India, wrote a letter to the King of Bhutan, Jigme Khesar Namgyal Wangchuck.
It was mentioned that, “In view of Bhutan instituting a democratic system of Government, it is logical that the Royal Government of Bhutan allow Mr. R.K. Dorji and those of his party members who are presently in exile, into the country without any preconditions. They must be allowed to participate in the democratic process of Bhutan so that they can contribute towards the building of a healthy democratic order in Bhutan. We believe that the Government of India will also most certainly facilitate and assist the reconciliation process”. A copy of letter was sent to the Prime Ministers of India and Bhutan. Besides, I also wrote a letter to the King presenting the need for both of us to work towards reconciliation and including me and my party into the polity of Bhutan. No reply was received.
The purpose of my visit to Nepal
After dropping the false, fabricated charges against me, the Government of Bhutan is now trying to treat me like an animal, which has been released and left to the elements, after years of confinement. I am no animal. I am a human being. I have the rights of human being. And this indifference of the Bhutanese government is not acceptable. I have been imprisoned for struggling for the establishment of democracy in Bhutan. I will continue to strive for democratic rights and justice as is enshrined in the Constitution of the Bhutan. Since travelling might be required often, I went to Nepal to renew my travel documents. 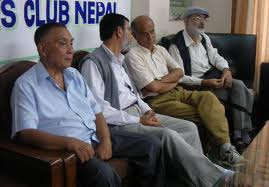 In Kathmandu, Nepal, I met Mr. Teknath Rizal, the noted human rights campaigner of Bhutan and Chairman of People Forum for Human Rights in Bhutan, Mr. Balaram Poudel, President of the Bhutan Peoples’ Party and Dr. D.N.S. Dhakal, Acting Chief Executive of the Bhutan National Democratic Party. During course of discussion, they stressed on the need for a new alliance amongst us for pursuing national reconciliation, inclusive democracy and the repatriation of exiled Bhutanese to their country. Incidentally, all these are long-standing organisations have a great deal of working experience. On the 22nd of August this year, we agreed to work together. I agreed to upgrade existing Druk National Congress (DNC) party office at Kathmandu, Nepal, which hereafter will also coordinate all the activities of the Bhutanese in the exile. This office is in addition to the existing DNC contact office and Indo-Bhutan Friendship Society’s office at New Delhi, India. We unanimously agreed to work on following basic points. i.e.:
1. The exiled political parties and the exiled Bhutanese must be permitted to participate in the forth-coming elections.
2. The Bhutanese refugees must be repatriated with honour and dignity, and must be allowed to participate in the political process. To call upon the international community to pressurize Bhutan to take back its citizens.
3. The immediate unconditional release of all the political prisoners in Bhutan who have been in prisons since the early 1990s.
4. To promote and strengthen the existing bonds of friendship at the people to people level among the citizens of Bhutan, India, and Nepal, which hasn’t been promoted to the desired level thus far.
5. To extend thanks to the international community and all well-wishers of the Bhutanese democratic struggle and seek continued support and solidarity.
The Alliance
The alliance entrusted me to lead the unified democratic movement. Our activities will be peaceful. All we want is constitutional rights which are granted to us by the Constitution of Bhutan, promulgated in 2008. We will keep the Government of Nepal informed and also seek their assistance and support in our initiatives. A delegation of the alliance will also meet the Government of India sometime in December to seek assistance to facilitate our repatriation and safeguard our democratic rights in Bhutan. We will urge the Government of India to assist us because the Government of India is the largest donor to Bhutan, and Bhutan and India also enjoy excellent friendly relations. India in fact has the responsibility to facilitate our repatriation and reconciliation so that its friendly neighbouring country, Bhutan, is not plunge into instability and unrest. The delegation will meet the International Community to garner our support and to pressure the Government of Bhutan to accede to our demands.
This alliance is unlike before and is beyond the realm of refugee camps politics. The follower of Bhutanese refugee’s issues would note that there are some 52 organisations in the Bhutanese refugee camps alone. What confounds one more is that individuals of one organisation will also be holding seats in more than three other organisations as well. In spite of such confusion, I would welcome any organisation which might feel they were left behind by the alliance. However, merely declaring interest to join the alliance won’t do. Those interested to join must demonstrate their commitment and ability to contribute to the alliance before joining.
The alliance wants to make certain other matters clear. First, to our Bhutanese brethren inside Bhutan, we want to bring caution to the misinformation by some with vested interests to interpret our work as negative. Our work is to strengthen the sovereignty, democracy, independence and peace in Bhutan, not the contrary. We want to reiterate the respect we have for the institution of Monarchy. We however, want democratic rights as enshrined in the Constitution of Bhutan. Every Bhutanese must recognise the fundamental truth that democracy is the right of the public and not just the right of a single individual. Democracy is for everyone – students, teachers, civil servants, the army, farmers, businessmen and others, and also for the King himself! In short, every citizen needs democracy in their life to lead their life in honour and dignity. We know that democracy in the real sense is absent in Bhutan. Therefore the time has come for us to seek our democratic rights granted under the Constitution.
We want to reassure our friendly neighbour India, that we will always value our excellent friendly bonds existing between us. We are optimistic that the Government of India will hold talks with the Government of Bhutan to enable us to return to Bhutan and lead the life of democracy loving citizens in Bhutan. We are also optimist that the United National Organisation, democracy-loving citizens and the democratic countries of the world will support our truthful initiatives and inalienable rights.


(Dorji is President of Druk National Congress)
Posted by Oh My GOD at 5:02 AM