No Objection Certificate for rain

By Govinda Rizal
“Did you get your NOC?’’

Jamyang asked me this whilst closing his umbrella, then proceeding to the police head quarter.

“No, not yet,” I replied. I knew Jamyang through a few encounters. For the first time I saw him in Thimphu.

One of my brothers, Hem was studying in Khaling. Once Hem came to Thimphu with his class mates during their educational tour and stayed with me. I was showing him around the campus when an officer drove near to us, stopped his car and asked us if we knew anyone from Khaling School. Hem started talking to him. The man was Jamyang. He had his nephew in Khaling School and wanted to send gifts as well as money to him. Hem agreed to help him and as a token, Jamyang gave us some cheese pieces and some ngultrums (currency). We considered him a generous person.

Months later I met him in a school auditorium, when he came to watch a drama, “King Gesar of Ling”. I was one of the door keepers. He arrived late and was without a seat. Feeling pity on the good man I got him a chair. This was my second encounter with him.

I again met him at the police headquarters in Thimphu. He was also there to obtain a No Objection Certificate (NOC), in his case for his relative. We exchanged formal greetings and he asked me if I had received my NOC. I told him it was ready on the officer’s table. He was pleased to hear my response however he had to wait a further two days. During that period I was in the police office. An NOC is a document provided by the department of police only to those who, and whose family members, had never been found to have said something that the king or the government had disliked. It proved innocence as well as loyalty of a family to the throne. It was mandatory to possess it in order to receive benefits as a rightful citizen.

I requested the NOC for an interview. My NOC was ready some time ago however they had delayed it with a question. I would stand at the end of the queue for the NOC, when my turn came and the officer asked me to wait. I was again made to join the end of the queue. Every time my turn came, I was asked to wait for some more time. Finally, I took the corner for my place and frequently requested for my NOC. Time changed, days changed and people changed, their ways of interrogation changed but neither did they change their one question, nor did I change my answer. The only fault they could find was my second name matching a leader’s surname. The authorities wanted to know my relationship with Tek Nath Rizal, a prominent figure they had in their net.

In two days, Jamyang got the NOC. He talked to the officer about me and in return taught me an affirmative answer to their question and left.

Some familiar and many unfamiliar people came to the office. As some received their documents while others didn’t, I could see the happiness and desperation dividing my school friends and country fellows.

That week, I experienced awful rain in Thimphu. From morning till evening I had to stay in the police office expecting them to give me NOC, which was ready on their table. After the office closed I had to walk the flooded streets searching for hosts to host me free for one more night.

I was eventually given the NOC on the day of the interview. It was too late for the purpose. By being a nomadic guest for about a month, I had demonstrated my parasitism to all the people I knew who were from my village and others who were not from my village. They had hosted me several times and I could not force myself to gatecrash any more. I decided to return to Gayglegphug which took two days to reach.

Two days after receiving NOC I was back in my village heading towards my home from a bus stop when a storm began to welcome me treacherously. My umbrella was a weak shield against torrential rain. I took the shelter at a local school, which had been closed for a year. Rain came with such a force as if to move the school building from its location. The corridor was too narrow to shed the downpour that went directionless like the wind. The only place I could squeeze myself into was a narrow corner between the closed door and the thick wall. Unlike in Thimphu, the lightning and thunder in Gayglegphug are wild.

After hours of waiting, the rain became less forceful but did not stop. I removed my shoes, carried them over a heavy back- packed bag, covered with an umbrella and walked towards home. Aiming to avoid attention from people in their houses I walked faster through those country paths. In other places I walked slower in order to reach home later. I wanted to reach home later to hide my defeat of receiving my NOC late. Rain still continued, followed by a bitterly cold wind.

When I reached the place where my house used to be, an incredible apparition of nothingness blurred my vision. To my unpleasant surprise, there was no house and not even a sign of a house in the place where it had once stood. In the areas where the beds, kitchen and ovens used to be, there were tall broom grasses growing, freshly planted. Then, I realized, my parents were no longer in the country, and proof that a house had existed was erased completely.

“Do you have some ropes?” asked Dhimal Dai.

“I am not sure; I will have to ask my parents”, I replied.

“Look around and give me some if you have”, he insisted.

“Look around and just take it”, I replied.

Dhimal Dai, a good neighbour in the newly established asylum seekers’ camp in Beldangi in Nepal, wanted a string to tie his flapping plastic sheet strapped between two bamboo woven nets that gave him a roof.

I did not know where the items were kept in my hut. I was a chronic guest in my hut. I had a bed and a book rack made from bamboo, and a few books and papers. My mother would cook and serve me. Sisters arranged my clothes and hung them besides my bed. My sanctum in the prized hut was made up of bamboo walls, plastered with soil and newspaper pasted on top of it. We lived in a matrix of tiny, beautiful huts. They looked like freshly painted huts on grey soil background with a few tall trees. The slums were panoramic to see but were not so pleasant to live. 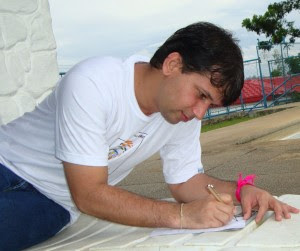 Rizal writes his 'untold story'. Photo/Shanta Rizal
No sooner had the above conversation ended, when my parents came home running, breathing louder than athletes after a marathon. It was an afternoon in early September 1993, when a storm began to hover over the bamboo huts. In times of storms, the people did not evacuate as they never had a safer place in the neighborhood to resort to. My parents took out a coil of string and began tying the ends of the roofs to bamboo poles and to stones on the ground. The children were outside running wild, their guardians running closely behind. The clouds grew dark and swirled. It was eerie to see kids playing outdoors. It was an opportunity for them to take a satisfying bath in the natural shower.

The storm soon became worse and the loosely tied roofs began to seek freedom from their places due to the increasing wind. People struggled to hold the roofs from being blown away by the wind. Lightning began to throw flashes and flames. If it had not been for the lightning, the afternoon was as dark as night. The wind and rain disturbed all forms of hearings. The plastic roofs amplified the rain’s beating and the wind’s howling. Within minutes, roofs were taken away; floods began from inside of the huts. Narrow spaces between the huts were filled with twigs and leaves from the trees; bamboo sticks from roofs and the walls. Although a few huts could retain their roofs, most of them had been blown away.

After about two hours the world was different. Cloud was gone, blue sky looked down sympathetically, and the sun peeped from the distant west. Birds were back on the trees and there were pools of water on the ground. People began to remake their disturbed roofs. I wanted to explore the true might of the catastrophe. Shoes were useless, we had no boots and slippers would not accompany our feet for the second step through the muddy soil.

Jewan, a relative accompanied me. We decided to travel with our bare feet to see the destruction. We walked across the camps.

To rebuilt huts, most of the owners had to restart foundations. There was nothing we could do. We talked with people, whosoever we met, on the range of destruction. Half way through the camp, we had to cross a small canal. There was a short bamboo bridge to cross it. When we were on one side of the bridge, ready to step on it, a big branch fell down from a tree and hit the bridge. We were saved by seconds- a narrow escape. We returned to our respective huts. Father had repaired the roofs to his best ability. There were papers scattered everywhere.

“Check if the papers on the floor are important”, father told me.

I found newspaper cuttings, which I had conserved as important, scattered all over the flooded floor.

There was a thin clean paper floating on the muddy water, it was my NOC.