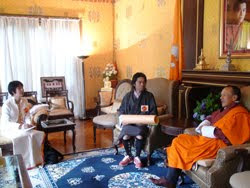 
Mr. Katsuhiko Hibino, Professor Tokyo University of Art, and Mrs. Hibino called on the Prime Minister today at 2.30 pm. Mr. and Mrs. Hibino are on a visit to the Asian countries to create art works to be exhibited at the Asian Pacific Festival at Fukuoka this year. 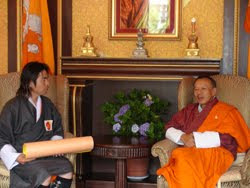 The Hon’ble Prime Minister, in elucidating the tenets of Gross National Happiness, said that culture, was one of its four pillars. Lyonchhen said that creativity was important for the individual, society and nation for advancement as well as to help preserve artistic heritage of mankind. In that regard, he thanked the visiting professor and his wife for inspiring the Bhutanese children and letting their creative energy to flow.
Posted by Oh My GOD at 1:55 AM