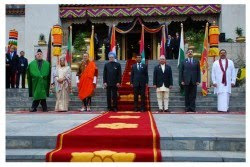 Saarc adopts silver jubilee declaration
30 April 2010
The principal outcome of the 16th Saarc summit, the 36-point Thimphu Silver Jubilee Declaration, was adopted yesterday by the eight leaders of the Saarc countries. Commemorating the 25th anniversary of the founding of Saarc, the declaration charts the future course of the association to make it an even more effective and a robust body.

“The true test of the success of this summit lies in the difference the decisions will make to the lives of millions of the poor and deprived in our countries. We, therefore, need to be focused and act on the decisions,” said the Saarc chairperson, Lyonchhen Jigmi Y Thinley. The leaders highlighted the need for more efficient, focused, time-bound and people-centric activities and called for appropriate reflection of all the Saarc decisions in the national policies and programmes of member states.

They resolved that the year should be commemorated by making Saarc truly action-oriented by fulfilling commitments, implementing declarations and decisions, and operationalising instruments and living up to the hopes and aspirations of one-fifth of humanity. The Maldives will host the 17th Saarc summit in 2011.

The leaders signed the Saarc Agreement on Trade in Services, which is expected to further deepen the integration of the regional economies. The convention on cooperation on environment was also signed. They called for an early ratification of the agreements. However, the proposal on disaster management rapid response mechanism could not be agreed upon since the leaders felt the need for more expert studies. The 15th summit declaration stressed the need for timely provision of relief in humanitarian emergencies. The declaration directed the creation of a natural disaster rapid response mechanism under the aegis of the Saarc Disaster Management Centre.

Saarc agreement on Trade in Services will enable the realization of the region’s immense potential in service areas such as health, hospitality, communications, computer, information, and air transport.

The Saarc Convention on Environment is expected to promote cooperation among the member countries in the field of environment and sustainable development.

The leaders agreed to form a South Asia Forum for generation of debate, discussion and exchange of ideas on South Asia and its future development.

The forum would provide inputs based on a comprehensive understanding for charting out the future course of Saarc. They stressed the need to reach out to different sections of the South Asian community, particularly its students and youth, private media, private sector, think tanks, civil society, and institutions of economic development.

The leaders emphasized a greater focus on people-centric development with due emphasis on socio-cultural progress and upholding traditions and values. The concept of GNH was noted. They welcomed Bhutan’s offer to host a Saarc workshop on GNH in 2010.

The leaders emphasized deepening regional efforts on poverty alleviation. They called for expeditious mainstreaming of the Saarc Development Goals (SDGs) in the national processes and completion of the mid-term review of the SDGs. They welcomed Nepal’s offer to host the third Ministerial Meeting on Poverty Alleviation in 2011.

The leaders welcomed climate change as the theme for the summit and reaffirmed their commitment to address this challenge. They emphasized that global negotiations on climate change should be guided by the principles of equity and common but differentiated responsibilities and respective capabilities.

They underscored the need to initiate the process to formulate a common Saarc position for COP16 and beyond.

They also called for focus on water management and conservation, and development of cooperative projects at regional level.

The leaders reiterated the importance of sustainably managing environment and development through adoption of eco-friendly approaches and technologies.

They called for effective regional programmes in early warning, preparedness and management.

They directed the development of a Saarc Youth Action Plan to guide regional cooperation.

They emphasised the need for the member states to take full advantage of the mechanism of the SDF through clearance and implimentation of the projects and programmes.

The leaders reiterated their commitment to implement Safta in letter and spirit. They emphasized the need to realize the full potential, through reduction of the size of the sensitive lists, acceleration of trade facilitation measures, and removal of non-tariff, para- tariff and other barriers.

The leaders emphasized the need to strengthen cooperation in education and directed greater interaction among the universities in the region towards undertaking of joint programmes on collaborative research and exchange programmes.

The leaders called for collaborative efforts to achieve greater intra-regional connectivity and endorsed the recommendation to declare 2010-2020 as the Decade of Intra-regional Connectivity in Saarc. They agreed on the need to expedite negotiations with a view to finalizing the two agreements on motor vehicles and railways.

They underscored the need for promotion of tourism to enhance greater people-to-people contacts in the region and called for the creation of tourism-friendly environment.

The leaders directed the Saarc agriculture ministers to vigorously pursue regional cooperation in agriculture covering all sub-sectors to enhance overall agricultural productivity. They directed early consideration of the concept of a regional seed bank, regional testing and certification of seeds, and a framework for transfer of plant genetic material and seeds.

The leaders emphasized the need to undertake studies to develop regional energy projects, promote regional power trade, efficiency, conservation and development of labeling and standardization of appliances, and sharing of knowledge and technologies.

The leaders reiterated their firm resolve to root out terrorism and recalled the Ministerial Declaration on Cooperation in Combating Terrorism. They emphasized the need to strengthen regional cooperation to fight terrorism and transnational organized crimes.

By Sonam Pelden
Bhutan observer
Posted by Oh My GOD at 6:07 AM

Email ThisBlogThis!Share to TwitterShare to FacebookShare to Pinterest
Labels: SAARC