The Japan Aerospace Exploration Agency (JAXA) is cordially announcing public release of "Glacial Lake Inventory of Bhutan using the Advanced Land Observing Satellite (ALOS, nicknamed "Daichi") Data" (evaluation version). In the Himalayan region, there are numerous lakes in the vicinity of glaciers. These glacial lakes impose potential risks for sudden outbursts and consequent floods. This type of flooding event is referred to as a glacial lake outburst flood (GLOF), which occurs frequently enough in the Himalayan region. With a growing amount of public and scientific concern about hazards, climate change, and water management associated with GLOFs, the "Bhutan GLOF Project" (*1) aims at updating and improving glacial lake inventory for Bhutan using new and high spatial resolution data from ALOS. The motivation for this release is to support the research community and various domestic and international projects. By releasing the evaluation version, we hope to collect comments and suggestions for the preparation of the full release of the inventory, now scheduled in the spring of 2012. 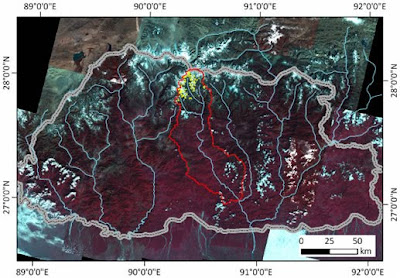 The inventory is based on images taken between 2006 and 2011 from the two optical instruments, the Panchromatic Remote-sensing Instrument for Stereo Mapping (PRISM) and the Advanced Visible and Near Infrared Radiometer type 2 (AVNIR-2) onboard ALOS. The construction procedure consists of ortho-rectification, geometric correction, pan-sharpening, and digitization to extract water bodies. Glacial lakes included in the inventory are bodies of water that lay between the terminus of the mother glacier and the Little Ice Age moraine. Lakes located within 2 km of the Little Ice Age moraine down-valley are also included to take into account a possible flooding event with multiple lakes being involved. In addition, supraglacial lakes on debris-covered glaciers are included. Finally, we set 0.01 km2 as the minimum lake size considering small lakes contribute a less amount of GLOFs' risk. For this release we selected the Mangde Chu sub-basin, located in the central Bhutan. The parameters included in the inventory are ID, latitude, longitude, area, length, width, and some references in addition to a shape file for each lake. There are 93 glacial lakes in the Mangde Chu sub-basin.