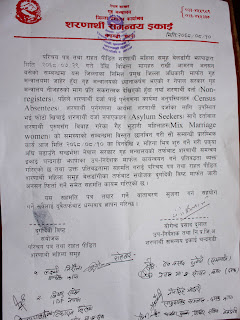 Hunger strike called off as govt commits to meet their demands

Following a written commitment from the government to start the registration of all kinds of asylum seekers including new ones within the next five months, the ongoing hunger strike was called off on Saturday at 4:30 p.m.

Acting CDO of Jhapa, Yogendra Dulal, offers Khada to hunger strikers as they agree to call off their protest (Picture : Vidhyapati Mishra)
Acting Chief District Office of Jhapa, Yogendra Dulal, and Durga Devi Bista signed the agreement paper where representatives from various agencies, rights defenders, the camp management committee of Beldangi and journalists were present as witness.
Based on the agreement, the government expressed its written commitment to resume the installed registration for issuing refugee identity cards.

“The government has acknowledged all demands of put forwarded by the agitating women, and commits to start registration of asylum seekers, census absentees and cases of new entry,” read the agreement paper.

However, Bista, who was leading the fast-unto-death since November 15, expressed doubt over timely implementation of the government’s commitment.
“We need to wait for resumption of the registration process to see if the government is serious towards our demands,” Bista told Bhutan News Service.
Meanwhile, the AMDA Nepal transported all women to Damak for their treatment from Beldangi.

At least four out of 12 exiled women from Bhutan, who have been fasting-to-death since November 15 demanding refugee status and other facilities, have been hospitalized.

An ambulance of AMDA Nepal in front of Beldangi-II camp office to transport hunger strikers for hospitalization (Picture : Vidhyapati Mishra)According to the AMDA (Association of Medical Doctors of Asia) Nepal that has been monitoring health of the agitating women from the beginning, Indira Bhattarai, who was hospitalized Thursday night, is being treated at AMDA Hospital, Damak.
While, Chandra Maya Kharka, Renuka Mongar and Radhika Poudel, have been referred to Koshi Zonal Hospital in Biratnagar for further treatment, Project Director of the Primary Heath Care Project for Bhutanese Refugee (PHCP-BR), Dr Madhurima Bhadra, informed Bhutan News Service, Friday.
The AMDA Nepal has been providing 24-hour medical assistance by maintaining a separate medical desk for the women in the venue.
“Our assistance to these women is standby 24-hours on humanitarian ground, said Dr Bhadra. “We are doing our best to medically care these hungry women.”

Renuka Mongar and Chandra Maya Khadka being transported to AMDA Hospital, Damak, on Thursday.According to Dr Bhadra, health conditions of all women in the strike have been deteriorating day-by-day.

“The blood-sugar level has come down, and they have developed acute weakness,” added Dr Bhadra, “Both the agitating women and Government of Nepal must be serious at this hour since longer fasting will create various side effects, including the threat to life.”

Representatives from various organisations and local authority failed to bring the ongoing fast-unto-death to an end Sunday as agitating women remained firm in their demands.Representatives from GoN, Acting CDO (third from left) and other agencies in the hunger strike venue .Following mounting pressures from various sectors, Acting Chief District Officer of Jhapa, Yogendra Dulal, visited Beldangi. However, he failed to convince the hunger strikers.
CDO Dulal requested Durga Devi Bista, who has been leading the 12-member women team in the protest, to end the strike, which she refused flatly.

Dulal tried convincing Bista that the government was not in a position to meet their demands immediately.

In reponse, Bista told him that her team was ready to sacrifice their lives if the government doesn’t agree to commit in written.

Rights defenders associated with the Human Rights Organization of Nepal communicated the development of the last meet held by their President Sudip Pathak with Nepalese Home Minister Bijay Kumar Gachchadhar.

According to their claim, Minister Gachchadhar has committed to address the issue in the next 10 days.

Meanwhile, two women, whose blood-sugar level has dropped down critically, are being treated in Damak-based AMDA Hospital.

12 exiled women from Bhutan, who have been deprived of refugee identity cards and other facilities from aid agencies, have already completed their 150 hours of fasting-to-death since last Tuesday.

BHADRAPUR, Nov 21: The efforts by the local administration and the human rights organizations to break the fast-unto-death going on at the Beldangi-based Bhutanese refugee camp have not born any fruits even as the hunger strike enters the seventh day on Monday.

The hunger strike has been organized by the Relief Deprived Bhutanese Refugees Women’s Group and 15 women are observing the fast-unto-death since November 15.

The Women’s Group has started the hunger strike demanding fulfillment of their five-point demands including that the Bhutanese refugees deprived of identity cards be given the cards and the provision of ration distributed by different donors.

Acting Chief District Officer of Jhapa district, Yogendra Dulal, coordinator of the Human Rights Organization of Nepal, East Region chapter, Dr. K.P. Subedi, among others had held talks with the representatives of the Women’s Group on Sunday in an effort to break the hunger strike. But the talks failed as the people staging the hunger strike were adamant they would not break their fast until all their demands were met.
The Group claims that 3,649 Bhutanese refugees living in six camps in Jhapa and Morang districts have missed the verification carried out by the UN High Commission on Refugees and therefore have not got the identity cards with them which has resulted in they being deprived of various relief assistance given to the refugees.

Some 15 Bhutanese women refugees have joined in the hunger strike.

JHAPA: The Bhutanese refugees in Jhapa district who have been deprived of identity cards and the government relief package have staged a fast-unto-death from Tuesday, demanding identity cards.

Announcing the initiation of the strike, chairperson of the Bhutanese Refugees Repatriation Committee (BRRC), Dr. Bhampa Rai accused the United Nations High Commissioner for Refugees of failing to address their basic needs.
Those refugees who have not got identity cards have been deprived of the government facilities including ration, he said.

President of Human Rights Organisation, Nepal, Damak chapter, Dev Subedi accused the government of not becoming serious towards the rights of the Bhutanese refugees.

Some 3,749 Bhutanese refugees in five camps in Jhapa and Morang districts have not received identity cards due to various technical reasons and they have been deprived of the government relief package, said Durga Devi Bista, chairperson of the relief-deprived Bhutanese women's group.