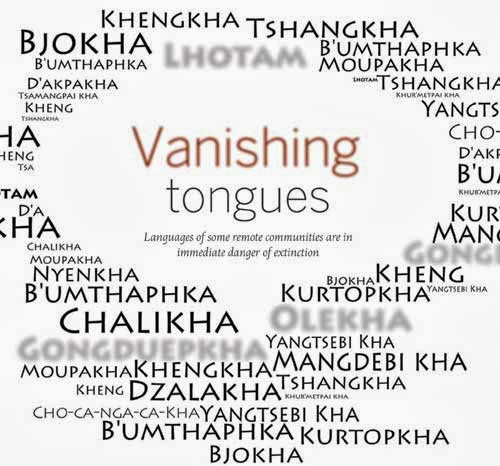 Languages of some remote communities are in immediate danger of extinction

COVER STORY Lama Shacha Tenzin, Angay Choden and Dadum have one thing in common besides being elderly members of their communities. They share a concern for the tongues they speak.

Lama Shacha Tenzin, 80, is from a remote village call Daksa in Gongdue, Mongar. Choden, 78, is from another remote village of Rukha from Wangduephodrang, and Dadum, 80 from the Doya community in Dorokha, Samtse.

While still being remote, their communities have felt and experienced the impacts of modernisation and development.

Lama Shacha Tenzin’s Gonduepkha, Choden’s Olekha and Dadum’s Lhotam have been recognised as dialects, among several others, under threat of disappearing, by linguists, who are currently in the process of documenting and preserving these tongues.

In Gongdue, only a handful can communicate in Gongduepkha, while the majority has moved on to other languages like Dzongkha, Sharchopkha and English.

“The youth don’t show much interest to learn their native tongue,” he said. “There’s modern education and new modes of communication.”

Gongdue has five chiwogs with 330 houses. It is one of the most remote gewogs in the country and, officially, it is five-day walk from Mongar town.

The gewog centre is at Daksa, which has highest number of people with 33 households. It has a school, a renewable natural resources centre (RNRC) and a basic health unit (BHU).

Currently, a farm road from Silambi gewog to Gongdue is under construction. These two gewogs are also the poorest in the dzongkhag.

Before many lived in the huts with banana leaves for roofing. With help from Tarayana foundation, many have built traditional one-story houses with CGI roofs.

Along with such developmental activities and exposure, the dominance of other languages has come.

Even in his family, Lama Shacha Tenzin said, children, who were currently living in other districts, preferred to speak other languages. “When I answer calls, they speak to me in Sharchopkha or Dzongkha.”

Gongduepkha, he said, was spoken by ancestors since time immemorial, but it was now waning.

Kuenga, 51, is the youngest among those who can speak Olekha in Rukha, Wangdue

Angay Choden worries that her native tongue, Olekha, dies with her generation


“We’ve managed to hold on to our traditional way of life and have many customs intact,” another elderly community member, Abi Yeshi, 70, said. “But our tongue may only be a name in future.”

Roads, education, radio, inter-cultural marriage, people from outside settling in the community, she said, has also impacted on the use of Gongduepkha.

“It saddens us to see it happen,” she said. “But there is comfort only in the fact that younger generation who were getting well versed in Dzongkha and English, have better opportunities for employment.”

“As communities open up different cultures are accepted and it breaks down social and cultural barriers,” Gongdue gup, Kencho Tshering said. “Over time local languages lose charm and utility.

In Rukha, Wangduephodrang the local tongue Olekha is under similar threat. Village elders say Olekha was the tongue once spoken by Rukha community. Now only a handful of locals are comfortable speaking it for everyday communication.

Most of the words are similar with that of Reti, the language spoken by the Monpa community in Trongsa.

“In fact, Oleps are also believed to have originated from Reti and settled down in Rukha valley while practising shifting cultivation,” Angay Choden, 78, who is originally from Reti said.

Apart from Angay Choden, four other elderly members of the community speak Olekha. Kuenga, 51, is the youngest to have thorough knowledge about the tongue.

“When we’re gone, our native tongue will end with us,” Angay Choden said.

Today there are around 17 households in the village, but all originated from two machims(ancestral houses) belonging to two early settlers, who were siblings.

There were only two concrete houses belonging to two siblings until 2000, when the other 15 were also built in a uniform style with support from Tarayana foundation.

Tekpa, 80, a village pawo, said Oleps were thekhelps (taxers) of Zhabdrung Ngawang Namgyal. Since they were living in thetsamdro (pasture) of the Punakha dratshang, they were asked to leave.

“Some left for Nabji Khorphu, some to Pasakha and some even to Tibet,” Tekpa said. “Only two siblings chose to remain back and that’s how Oleps exist.”

Rukha village is surrounded by a chain of hills and it takes seven hours by foot from Taksha bridge on the Wangdue highway.

Maize and rice are the staple crops. Farmers have piggeries, and recently two fishery ponds were started. Bonism, which practises sacrifice, is still prevalent. Ritual performed by the pawo requires a pig or ox as sacrifice to local deities to release the patient’s soul.

It is in this ritual that the Olekha is used, apart from the few elderly who speak it.

Otherwise, Dzongkha, which was once a second language, has now taken over as the main language in the community. Most members of the community can also speak Lhotshamkha fluently.

Cross-cultural marriage, education, and developmental activities, elders said, was the reason why Dzongkha took over.

“Though my father was an Olep, I can’t speak a word of it; my father would communicate in Dzongkha and I was never taught Olepaikha,” she said.

Tekpa’s wife, Kilem, 74, said the youth were also disinterested. “We try and teach them the basics, but they don’t come forward and are reluctant,” she said. “There’s no passion and sometimes it’s also seen as inferior to speak our tongue.”

Though the Oleps have a good number of songs, not one has been recorded and none in the community can count till ten in Olekha.

Far south, in Lhoto-Kuchu originally known as ‘Doya’ under Dorokha dungkhag in Samtse, the elders believe they are slightly in a better position when it comes to preserving their tongue. The dominant tongue in use is the local dialect, Lhota officially known as Lhop.

The community, which is a five-hour drive from Samtse, has three parts, Lhoto-Kuchu Jigme, Lhoto-kuchu Singye and Lhoto-kuchu Wangchuck.

No one in the community knows how the Lhota dialect came about. Elderly Doyabs said they believe in maintaining what their ancestral have left for them.

While it would have been a surprise to hear a Doyab speak Dzongkha about a few decades back, it is now ordinary. Elders in the community say, over the years, with development, people from other communities started coming in and, with them, came different languages, like Dzongkha and Lhotshamkha.

While multilingualism was encouraged and appreciated, the elders said they did not discourage them to learn their own too. Few said, if the trend continued, Lhotam might be heading down the same road as other threatened languages.

Dadum, 80, said the elders made sure to speak in Lhotam among themselves, and it was compulsory for children to speak in their own dialect. “We don’t want them to forget their language,” he said. “But we don’t discourage them from learning Dzongkha too.”

The community, however, has young Doyabs, who can only speak basic Lhotam and are more fluent in Dzongkha. “Parents are advised to be responsible.”

As a teenage, Dadum said he never heard of Dzongkha or anyone speak it. “I only remember meeting people, who spoke Lhotshamkha, since they were living in neighbouring villages,” he said.

Because of the proximity, Dadum picked up Lhotshamkha but never learnt Dzongkha.

“Our children started going to school and picked up different languages,” he said, adding these new languages were of use when they visited Samtse.

Dzongkha, he said, also came in with government officials working in their communities, and through the non-formal education (NFE) program started in the 1990s.

Penden Lham, 20, said she picked up Dzongkha after joining the NFE. “The first word I learnt was lopen (teacher),” she said. “It was difficult at first but we picked up, and I think it’s good for us to know another language apart from our own.”

Almost all, which is 985 men, women and children living in the three communities speak Lhotam.

Omchu, 56 said it was comfortable speaking in their own tongue. “But we worry sometime that our language might come to an end like our attire,” she said. “The young hardly ever wears our attire.”

Another villager Nima said sometime he is overcome with feelings that development, while bringing in a lot of possibilities, also kills the uniqueness and identity of a community.

For the youth, Lhotam doesn’t serve a purpose beyond their villages and learning Dzongkha is not a fad but a necessity. “We don’t see harm in talking in Dzongkha, after all it is a language too,” a Doyap taxi driver, Cho Thinley, 30, said.