BLACKLISTED IN BHUTAN: Love Lost and Love Transformed in the Land of Gross National Happiness by Rieki Crins. 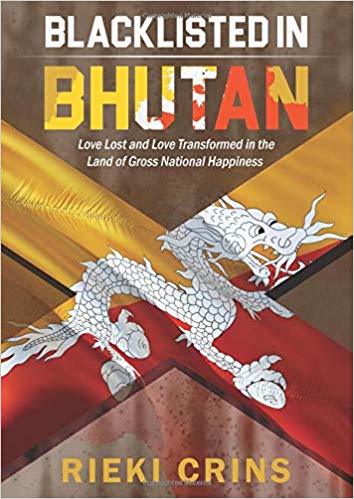 Rieki Crins reached Tsachaphu, then a rural village of hot spring in the Pochhu valley in Bhutan, for anthropology research for her Masters and later continued it for her Ph.D. She lands up in the village with a European mindset keeping and frequently comparing Bhutan to Medieval Europe. She has an abundant appreciation for the country and the villagers. Very soon her elite European mindset and behavior crush with the culture shock.
She reaches to a morning meal without washing her hands or face- the basic habit all Asian learn from the cradle.
She digs out the unique but prevalent features of rural health, hygiene, agriculture, culture, and hardship.
She has picked up the local language and excavated the culture to its depth and made the culture the subject of the book.
Throughout her writing, she appears an innocent and energetic researcher. Even after her Ph.D., she visits Bhutan twice a year as a tourist guide. She struggles to anchor in Bhutan with a hotel cum school. Her effort benefits many unemployed youths.
The twist comes when, without a yellow signal, her visa to Bhutan is denied without an explanation. Someone explained to her that the denial was because she was ‘Blacklisted.’ Thereafter, her writing flashback to the incidences of restriction and dictatorial rule in the silent country. She begins to see hypocrisy in the King's newfound ideology of Gross National Happiness.
She recalls some possible causes and speculates the reason to be one of her Facebook comments that possibly upset a member of the powerful royal family.
There is a big population, in and outside Bhutan, which is critical of the autocratic government. The title of the book ‘BLACKLISTED IN BHUTAN’ gets the early attention of such a group of people.
She reached Bhutan in February 1990 when the government was iron-fisted handling a serious dissident movement. The book is free from the description of such political background.
What she has explained but not concluded is her description of Wangmo’s and her partner- a Cello virtuoso- Maria’s anomalous behaviors in Bhutan. Her description matches TN Rizal’s description of Mind control in words and essence. Was she mind-controlled? Was her mind/intention read before taking an action on her? Reiki only can recall, re-evaluate and share it in detail in the future.
She has also mentioned her engagement with Karen refugee/community in Burma and Thailand.
There are plenty of clues for the readers to speculate the reason for the denial of her visa to Bhutan.
On top of all the Book is a masterpiece on the culture of a Drukpa village. However, the bold title ‘BLACKLISTED’ shadows her content.


A one sitting book is full of carrying, entertaining and educating contents and is one of the must-read books for the students of culture and anthropology.
Posted by Oh My GOD at 7:40 PM