The 7th International Traditional Medicine Conference in Bhutan Administrative High school in Semtok district near Thimpu, the capital of Bhutan was held on 7th to10th of September 2009. 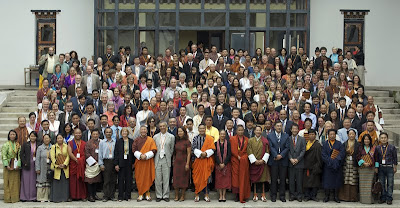 The conference was attended by senior doctor Gashe Kalsang Norbu, a doctor from the Tibetan Red Cross Society, two doctors from Lhasa and Shigaze, a Tibetan professional and four doctors from Tso-ngon county eastern Tibet as well as three doctors from dechen county eastern Tibet. There were also participants from Nepal and India, the director of The Central Council of Tibetan Medicine Dorjee Rabten and secretary Thukme Paljor, doctor Dawa and Pema Dorjee from the Central Tibetan Medical Association in exile. Among the participants were also teachers from the Tibetan Traditional Medicine School in exile - Ragshi Tsultrim Sangye and doctor Nyima, the doctor of Meriling Monastery - Geshe Rinchen Tenzin and doctor Gashe Rabsal Nyima Woser.

This conference brought together medical professionals from inside and outside Tibet as well as doctors from the Himalayan region, Chinese and many foreigners.