10 September, 2009 - Returning yesterday from his eight-day visit to Japan, Prime Minister Lyonchhoen Jigmi Y Thinley said the visit confirmed good relations between the two countries that will not be altered by the changing political situation in Japan.

Japan had its general elections in August this year where the opposition Democratic Party of Japan defeated the Liberal Democratic Party that had been in power for almost 52 years.
“Japan is one of the most important developing partners of Bhutan and, with this visit, we were able to strengthen and build linkages with both the parties,” said Lyonchhoen. “I’ve come back with assured support and many opportunities to collaborate in pursuit of various programmes the government is committed to.”

Lyonchhoen said he made it very clear to all Japanese officials he met that it was not his intention to request Japan for additional assistance beyond what Japan had already committed. “We are fully mindful of how Japan has been worst hit by the economic recession. We just wanted to thank the Japanese people for their cooperation and assistance,” he said.

“But I told them that there’s a great need for ambulances and they’ve noted that,” said Lyonchhoen. “There’s a high possibility that several ambulances and fire fighting engines may be forthcoming within this year.”

Lyonchhoen Jigmi Y Thinley said that the most important event was his meeting with the outgoing prime minister of Japan, Taro Aso, during which he thanked the Japanese government for all the contribution and support to Bhutan’s development process. 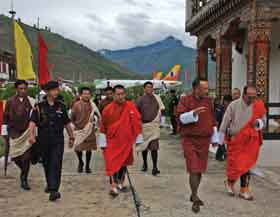 “One of the outcomes of my visit will be a significant increase in Japanese tourists to Bhutan,” said Lyonchhoen. He said that an agreement would be signed between the government and JALPAK, which will formally recognise Bhutan as a high-end tourism destination. A JALPAK team will visit in October and operations will start by spring next year, said the prime minister.

Lyonchhoen also met with the Tokyo metropolitan governor, who expressed his interest in supporting Bhutan in technological cooperation. “He gave me a list of activities in which we might find interest. But I informed them and many other business people that we’re at present looking at the possibility of upgrading our Paro-Bondey farm machinery workshop into a factory that could manufacture most parts for our farm machinery,” he said. “By upgrading, we’d need to import only the engine and the more sophisticated parts, thereby making our mechanisation of rural farm sustainable.”

During his visit, Lyonchhoen also met with the Japanese vice foreign minister, a very prominent sports personality. “I’ve invited her to visit Bhutan with the view to build relations between our sports organisations and the Japanese sports establishments,” he said.

On foreign direct investment in the area of building health facilities, Lyonchhoen said that he had a discussion with a leading biotechnology company. “This is an area we think we’ve considerable potential for in terms of having abundance of herbal medicine plants. The concerned party will visit Bhutan soon to explore the possibility of establishing a high-tech medical and research centre.”

During his meeting with the vice president of JICA, Kenzo Oshima, Lyonchhoen said he thanked them for the support they have committed. “We hope that, despite the difficulties the Japanese government is facing as a result of recession, there would be no withdrawal of earlier commitments. And this was confirmed,” he said. Lyonchhoen Jigmi Y Thinley said he studied a Japanese farming cooperative to replicate the idea in Bhutan. “The government is committed to promote cooperatives and we explored opportunities to import machinery for grading our food products and installing them in particular places, starting from Thimphu, Phuentsholing, Gelephu and Samdrupjongkhar,” he said.

Lyonchhoen had gone to Japan on the invitation of the junior chamber of commerce in Fukuoka district to speak on Gross National Happiness. He addressed an audience of more than 2,000 people, which comprised of young leaders of the chamber and important politicians.

“Relations between Japan and Bhutan have been diversifying with greater levels of exchange and Japanese people have taken great understanding of Bhutan’s development process. This relation will continue to grow,” he said.

A Buddhist group in Tokyo donated 400 bicycles to Bhutan during the prime minister’s visit to Japan.

“Another group has arranged for its transportation costs,” said Lyonchhoen Jigmi Y Thinley. “We’ll probably, depending on what the cabinet decides, give them to those people, who will pledge sincerely to use the bicycle to go to work instead of cars.”

He said that the government has already taken a step to reduce the use of private vehicles in Thimphu. “We’ve added some 13 buses during the coronation and centenary celebrations to increase public transportation and we’ll continue to add more buses,” he said.

“Through the use of 400 bicycles during working days, we’ll be able to reduce carbon emission. The idea is to make Thimphu a bicycle city,” said Lyonchhoen.

A non-government organisation in Japan, AMDA, also donated a Japanese ambulance to Bhutan.

By Phuntsho Choden
Posted by Oh My GOD at 1:27 AM