2010-09-27 12:00:00
Bihar Chief Minister Nitish Kumar met Bhutan Prime Minister Lyonpo Jigmi Y. Thinley here on Sunday to discuss a proposal for the development of a Buddhist circuit in the state. 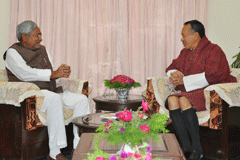 "India has helped Bhutan in its growth. Bhutan has developed so much that it has one of the highest per capita incomes among SAARC countries. The electricity generated in Bhutan is used by India also. So, we have a unique relation with Bhutan," Kumar told reporters.

" I was very encouraged by the plans and the ideas of the chief minister to improve services in Bihar which will be of course good for the people but equally very beneficial for pilgrims who come from all over the world," said Thinley, who is on a three-day visit to India.

Thinley, along with other senior functionaries of his delegation, were special invitees at the meeting, which was attended by 150 delegates on Saturday.

He further acknowledged India's role in keeping the philosophy and traditions of the religion alive.

"We as Buddhists are indeed grateful that the vision of this great Bodhisattva has been realised by the endeavors of the Mahabodhi Society and its members and indeed by the support and the patronage of the Government of India, the Government of Bihar and the officials of the local-government here in the districts where the four important places are located." Thinley said.

Thinley said that he would like to contribute to the society by upholding its values and goals.

"It shall be my endeavor to contribute to the promotion of all the values, all the goals and objectives with which this society was founded," he added. (ANI) 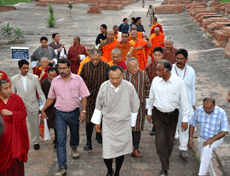 Thinley is one of the 150 delegates attending the 113th annual general meeting of the MSI.

Before the meeting began, Thinley visited the Mahabodhi temple in Bodh Gaya, about 120 km from here. He will Sunday visit Rajgir in Nalanda district which is another historic place associated with Buddhism.

According to MSI president Prasann Jaysurya, it was the first time that the Society's annual general meeting was being held outside Kolkata. (IANS)

3. PM takes over as president

Mahabodhi Society 27 September, 2010 - “By serving as the president of the Mahabodhi Society, I, as the prime minister of Bhutan, a country that has been guided by the philosophy and teachings of Buddha, and the people of Bhutan, consider ourselves indeed privileged to have the honour to serve the society,” said Lyonchhoen Jigmi Y Thinley.

He was addressing a gathering of more than 200 Buddhist monks and members of the Mahabodhi Society gathered at the Mahabodhi temple in Bodhgaya, India on Saturday evening as they welcomed their new president.

The members have come together for their 113th annual general meeting on September 25.

Mahabodhi Society of India is a south Asian Buddhist society founded in 1891 by the Sri Lankan Buddhist leader, Anagarika Dharmapala. The organisation’s self-stated initial efforts were for the resuscitation of Buddhism in India, and restoring the ancient Buddhist shrines at Bodh Gaya, Sarnath and Kushinara.

Lyonchhoen said that he accepted the offer as the president of the society for the next three years, because he believes that the Mahabodhi Society has and can further strengthen its capacity to serve human society in pursuing happiness.

“In my three years, we’ll be able to work together with a purpose in mind and it will be my endeavour to raise interest towards the Mahabodhi Society, increase the number of members and to further consolidate the support the Mahabodhi Society has received from all sections of society,” the prime minister said.

The outgoing president of the Society, who is from Sri Lanka, Prasana Jayasuriya, said that the 113th annual meeting was a historic occasion for the society, as such a meeting was being held in Bodhgaya for the first time, instead of being held at its headquarter in Kolkata. “The prime minister of Bhutan has also given his consent to take over the presidency, which is a privilege for the society,” he said.

The governing body of the Mahabodhi society has 75 members, who elect the president. Lyonchhoen Jigmi Y Thinley was called upon to undertake the duties of the president on August 24, 2009 during the secretary general of the society, venerable Dr Rewatha Thera’s visit to Bhutan.

Lyonchhoen, during the three-hour annual general meeting, congratulated the secretary general venerable Dr Rewatha Thera and outgoing president Prasana Jayasurya for their dedicated service to the society and to dharma.

Lyonchhoen also paid tribute to the founder of the Mahabodhi society, Anagarika Dharmapala. “It’s because of him and those, who supported his vision that today we find in India the birthplace of Lord Buddha, where the most holy of shrines have been restored and whereby, we as Buddhist are able to pay homage to Buddha and dharma - the way of life,” he said. “We as Buddhists are indeed grateful that the provisions of bodhisattva has been realised by the endeavours of this Mahabodhi Society, and by the support and patronage of the Indian government, government of Bihar and local governments in the districts, where these important places are located.” 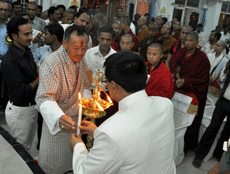 Lyonchhoen spoke on the significance of balancing spiritual and material growth and spoke at length on the four pillars of GNH, its domains and the variables.

He informed the gathering of more than 300 people that Bhutan realised that the economic model of Gross Domestic Product was just not sustainable. “It was a self destructive process where in the end, human greed would consume the world.”

The Prime Minister said that Bhutan was not satisfied with the various economic models and therefore, His Majesty the Fourth King came up with the holistic concept of GNH.

Lyonchhoen Jigmi Y Thinley also accepted the vice chancellor of the university, Mr Arvind Kumar’s request to sponsor a professor as the Gautam Buddha Chair for the faculty of Buddhist studies and philosophy. Lyonchhoen will also provide a grant to the University for purchase of books for deprived students and talented research scholars.


Lyonchhoen also visited the ancient Nalanda University site, the Shanti Stupa and Japanese temple in Rajgir, where the Prime Minister was greeted by young school children. 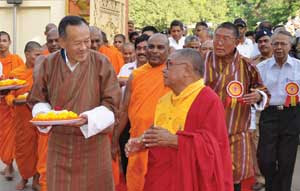 Lyonchhoen arrived in Varanasi yesterday and visited the Sarnath temple, where he spoke to the students of the Mahabodhi Society School and several devotees.

The Prime Minister, as the president of the Mahabodhi Society also inaugurated an eternal lamp build by more than 100 devotees from Sri Lanka.

5. Bhutan to build a temple and guest house in Rajgir

September 27: Meeting with the Chief Minister of Bihar, Lyonchhoen Jigmi Y. Thinley requested the Bihar government to give a plot of land in Rajgir, about 3 acres, to build a temple, an area for meditation and a rest house for Bhutanese. The Chief Minister, Nitish Kumar expressed an assurance and said that they have already asked designated officials to identify the land.

Lyonchhoen informed the Chief Minister that the number of Bhutanese visiting the holy destination through annual pilgrimage is increasing by around 20 percent annually. He said that thousands of Bhutanese visit Rajgir to take a dip in the hot spring.

“Bihar is an important place, in the spiritual point of view, not just for Bhutanese people but for a growing number of Buddhist people all over the world,” Lyonchhoen said, adding that he appreciates the way in which the Chief Minister has provided patronage and support for the rich cultural heritage.

Congratulating Lyonchhoen on becoming the president of the Mahabodhi Society of India, the Chief Minister also asked Lyonchhoen to appoint a designated Bhutanese person to look into the matter.

During their meeting, Lyonchhoen urged the Chief Minister to work together with the Mahabodhi society to make Bodhgaya and its rich cultural heritage accessible to everyone. “We must be more active and make teachings of dharma more accessible to people by not being evangelical and unethical,” Lyonchhoen said.

The Chief Minister said that the though Bodhgaya is well connected through the train routes, the domestic flights services will also increase alongside the expansion of the runway. “A new airport will also come up in due course of time,” he said.

The two leaders also discussed to establish additional flights to Bodhgaya and increase the frequency of these flights. 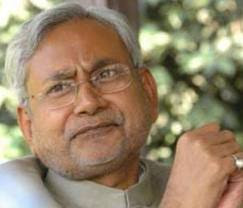 “We are very grateful for the support and care that Bihar government has provided not just to the Bhutanese but also those from all over the country,” Lyonchhoen said.
Posted by Oh My GOD at 7:18 PM