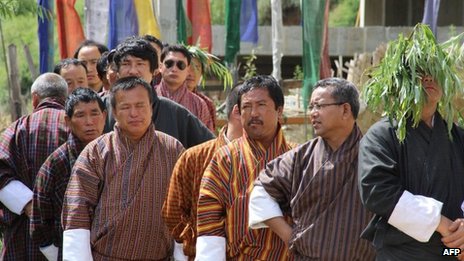 Turnout was high, at an estimated 80%


The PDP beat the ruling Druk Phuensum Tshogpa (DPT) party, which has strong links to the king.


The turnout was high at about 80%, said officials. The kingdom's struggling economy and ties with neighbouring India were key issues in the campaign.


The country has been a democracy since 2008, when the king voluntarily relinquished his absolute power.


The PDP won 32 of the country's 47 parliamentary seats, according to results posted on the official website of Bhutan's Election Commission.


The DPT, which won the last election in 2008, only secured 15 seats in Saturday's poll.


The PDP has criticised the government for a recent deterioration of ties with India, a key ally.


For decades, Bhutan has relied on its giant southern neighbour for much of its trade and foreign policy.

India's recent massive reduction of oil and gas subsidies for Bhutan has sparked speculation that this may be because of the Himalayan country's improving relations with China.
BBC

Bhutan's main opposition party has won a landslide majority in parliamentary elections. It was the second round of voting in just the second election in the Himalayan kingdom’s history.
The official website of Bhutan's Election Commission says the People's Democratic Party (PDP) won 32 seats in the 47-member national assembly in Saturday's voting, with the ruling Peace and Prosperity Party (DPT) winning only 15 seats.
Both parties emerged as the two leaders following a primary vote back in May that saw four other parties eliminated.

Bhutan hopes that tourism will play a larger role in the kingdom's development and in alleviating poverty. But expanding tourism also poses challenges for the small country. (28.02.2012)
The country's chief election commissioner, Kunzang Wangdi, said a total of 850 polling stations had been set up, many of them in remote mountain villages. About 400,000 people were eligible to cast their ballots in the polls.
In 2008, the DPT won the election by a landslide and won the first round of this year's polls with 45 percent of the vote.
Among the issues said to be foremost in the minds of the kingdom's voters are rising fuel prices, after neighboring India cut subsidies on cooking gas and kerosene to Bhutan. The country has also been struggling under the effects of a credit crunch, another factor that has hurt the popularity of the government.
Bhutan's king gave up the monarchy's centuries-old absolute power in 2008, allowing the introduction of democracy to the Himalayan kingdom, which didn't introduce television until 1999.
Official results of the election will be announced on Sunday.
dw.de