Bhutan is falling behind in GNH 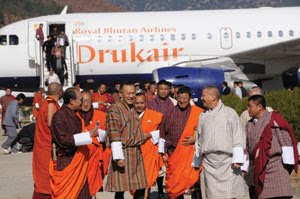 5th International GNH Conference30 November, 2009 - The concept of gross national happiness (GNH) may have originated in Bhutan but, when it came to its implementation, Bhutan was falling behind other countries.

This is what the Bhutanese delegation, led by the prime minister Lyonchhoen Jigmi Y Thinley, realised after attending the 5th international GNH conference in Iguassu, Brazil.

Prime Minister Lyonchhoen Jigmi Y Thinley, who arrived home yesterday, said that he has come back with a determination to mainstream gross national happiness (GNH) in a way that every Bhutanese begins to play a more involved role. “The conference was highly educational and we learnt a lot. GNH is being implemented by NGOs, businesses and local government in certain parts of Brazil, which is far beyond what Bhutan is actually doing or has achieved,” said Lyonchhoen. “We’ve returned with the kind of concern that the people and the country, where GNH has originated, are actually falling behind.”

The conference was held from November 20 to 24 and attended by more than 800 professionals, including doctors, lawyers, educationists, as well as policy makers, civil society leaders, intellectuals and academics, students, and corporate leaders. The conference was organized by the Future Vision Ecological Institute and the Itaipu Bi-national Hydroelectric Facility.

Leading a 24-member delegation from different sections of Bhutanese society, Lyonchhoen said that the four pillars of GNH, which are divided into nine domains and further divided into 72 variables, are fully understood and appreciated by two Brazilian city governments – with a population of 130,000 and almost 300,000 people respectively. The cities are adapting GNH principles as public policy, along with 14 other municipalities, which are also reported to be taking up GNH surveys.

A nationally known cosmetics company, Natura, has also adopted its own GNH approach to enhance the well being of its employees, according to the prime minister. “This company has started implementing GNH not only in the way they manage the organisation, organisational and personnel management structures, but in terms of production as well as marketing,” he said.

Lyonchhoen said that a university in Brazil, Campinas, has also started a course on GNH and is conducting research on GNH. “In Bhutan, none of our institutes has done that,” he said.

GNH is also being practised at the community level in Brazil, according to Lyonchhoen. “In a particular village, called eco-village, the nine dimensions of GNH are being practised on a day-to-day level,” he said.

>From the first international conference to the fifth, Lyonchhoen Jigmi Y Thinley said that GNH has grown. “The focus and discussions during the 5th conference were mostly on the practice and implementation of GNH,” he said. He also said the GNH idea is spreading and that, although Bhutan is the origin of this concept, it needs to learn and understand more. “GNH remains as an idea that needs constant development and refinement. The concept has not been infused and imbedded in our policies. At the school level, university, civil servants and at the level of business people, the concept is not well understood,” he said.

Brazil is the longest journey that GNH has made, in terms of geographical distance, language and culture, according to information and communication secretary, Dasho Kinley Dorji, a member of the delegation. He said that, for Brazilians, who are taking up GNH activities, the fifth conference was an introduction to people and ideas from Bhutan, the source and the home of GNH. “Bhutanese participants actually saw people doing GNH in Brazil,” he said.

A senior government official said that they were now aware that Bhutan was not really implementing GNH.

The Bhutanese delegation has decided to form a core-group of people, who will now begin discussing how to start implementing GNH at the individual, family, community and various institutional levels, according to the Lyonchhoen. “Media will also have to play an important role,” he said.

Lyonchhoen said that Bhutan has now reached a stage where GNH can confidently be infused in very practical ways within the society, beginning from the education system. “The international conference has deepened and furthered our understanding of how GNH can be implemented, measured and monitored,” he said. “It has also deepened and furthered our commitment to its pursuit,” he said.