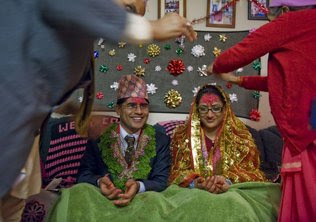 [ Relatives bless wedding couple Bhanu Adhikari, 29, left, and Kamala Chauhan, 27, by putting "tika" – rice mixed with yogurt, sugar and red dye – on their foreheads during a Hindu wedding ceremony in east Sacramento. The newlyweds met in eighth grade, but years in Nepalese refugee camps kept them from sealing their union. ]


The couple – who sealed their long-anticipated union in an elaborate Hindu ceremony – fell in love 12 years ago behind barbed wire in a Nepalese refugee camp.
Clad in red, gold and green wedding clothing, they celebrated not just the culmination of their love and bonding of their families, but their new life of religious and political freedom in the United States.

"Good climate, good soil, good people," declared a bubbly Adhikari, one of the first 400 Bhutanese refugees who have been resettled in Sacramento this year.

His bride's family resettled in Phoenix in March. The Hindu wedding ceremony at Adhikari's apartment welcomed Chauhan, 27, into his family and covered all her new responsibilities as a daughter-in-law.

Adhikari, 29, became a teacher in the refugee camp. Here he works as a cook. "It took me four months to find this job – it's easier to find a diamond," he said. "I want to be a pharmacist."

The Bhutanese represent the latest chapter in Sacramento's rich immigrant history, which embraces more than 100,000 refugees from across the globe.

Bhutan is a poor nation of 700,000 people perched in the Himalayas between India and Tibet. Most of the Bhutanese seeking refuge in the United States are Hindus who say they were persecuted by the government. As many as 600 more will be resettled in the Sacramento region.

Half the Bhutanese already in Sacramento who speak some English are working, said Rachel Lau, whose agency, International Rescue Committee, is helping resettle them.

"Bhutanese are very different in comparison with a lot of our other clients," Lau said. Most couldn't work in the camps in Nepal.

"So they basically were idle for two decades. They've used that experience as motivation," Lau said. "They pretty much get off the plane ready to work and they will do whatever."

Many, including several of the groom's relatives, work as $8 an hour hotel maids.

Others have gotten jobs at Fry's Electronics, grocery stores, gas stations, fast food franchises and a uniform cleaning company, Lau said. "The larger Indian Hindu community has taken them under their wing with some furniture donations and jobs."

Chauhan, the new bride, was a social worker in the camps. She plans to become a cashier, the job she had in Phoenix, and eventually hopes to become a nurse.

Outcasts in the camps

The couple said their families fled to Nepal to escape Bhutan's oppressive government, along with about 100,000 other Bhutanese Hindus of Nepali origin who settled in seven camps in Nepal.

The Bhutanese Hindus – called Lhotsampas, or people of southern Bhutan – claim they were driven off their lands and jailed for holding nonviolent protests.

About 20,000 have been resettled in the United States since March 2008, according to the U.S. State Department.
Bhutan denies human rights violations against the Lhotsampas and considers them illegal immigrants who threaten Bhutan's "distinct political and cultural" identity, according to Tshewang C. Dorji of the Permanent Mission of the Kingdom of Bhutan to the United Nations.

"The citizenship laws of Bhutan are not discriminatory. It will only be found discriminatory by illegal residents," Dorji wrote in an e-mail exchange with The Bee.

"Granting citizenship to such people would create a dangerous precedent for a small country like Bhutan."

The United Nations High Commissioner for Refugees said most of the refugees are descendants of Nepalese who migrated to southern Bhutan in the late 19th century to farm and settled in malaria-infested lowlands.

The Lhotsampas who left the lowlands for the camps in Nepal spent nearly 20 years there before the United States and other countries agreed to resettle them.

"Many of them were stripped of citizenship rights and were effectively expelled from the country," said UNHCR spokesman Tim Irwin. "They … feel they had no option but to leave."

About 80 percent of the Bhutanese newcomers were farmers famous for their orange orchards, ginger and nuts.

The groom's grandfather, 83-year-old Badri Pokharel, misses his 17 acres, his home and his temple. In a corner of his Sacramento apartment, Pokharel recites mantras from the holy Gita and kneels in prayer before Laxmi, the goddess of wealth, depicted on an electric prayer wheel that spins and hums.

"There are 18 chapters, and every day he recites one chapter," explained his son Rup Pokharel, the groom's uncle. As Hindus, the Lhotsampas were the religious minority in a primarily Buddhist country.

Badri Pokharel said his Buddhist friends who did not support the government's mistreatment of the Lhotsampas were not "allowed to raise their voice."

He said he and other Lhotsampas staged a peaceful protest in 1990 demanding freedom of speech and religion. 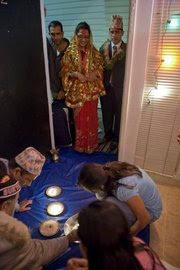 [
Bride and groom Bhanu Adhikari, right, and Kamala Chauhan, center, arrive with suitcase from the bride's family home in Phoenix for the welcoming ceremony Dec. 2 in east Sacramento. Seven lamps welcome Hindu goddess Laxmi in a prayer for wealth and harmony with the entrance of the new bride. ]


"They were tortured in the jail, hundreds of women were raped in public, houses were burned and people were forced to leave the country at gunpoint," said Rup Pokharel, 35, a journalist and teacher in the camps.

Inside the camps, he said, people died from starvation, lack of medical care and poor sanitation.

Between his shifts at a uniform store, Rup Pokharel takes fellow Bhutanese immigrants to see doctors.

"We've noticed an incredible amount of health issues in the community," said Lau, the refugee coordinator. "There are a lot of urgent hospital visits, trying to find specialists."

Some are malnourished, others suffer from epilepsy and bacterial infections but never had medication until they got to Sacramento, Lau said.

But on this joyous Wednesday night in December, several dozen Bhutanese made happy memories. The groom, Bhanu Adhikari, hugged his new bride and recalled how she won his heart in eighth grade.

"She was pretty, of good moral character, a good student from a good family," he said, making her smile.

"He was very talented, friendly, had a good personality and was very helpful in school," she said. 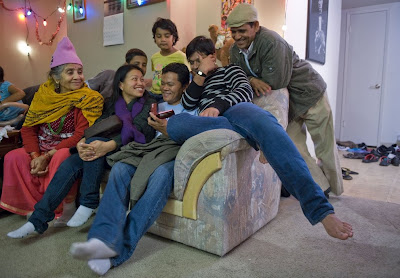 [ Sabitra Pokharel, left, grandmother of the groom, smiles as relatives watch the wedding video. The couple delayedmarriage while they were in the refugee camp. "We were always beggars," Adhikari said. "For 19 years it was a kind of hell, but it teaches a lot of lessons on how to progress in life, and go further." ]

They didn't get married in the camp because he couldn't provide for her, Adhikari said. "We were always beggars. For 19 years it was a kind of hell, but it teaches a lot of lessons on how to progress in life, and go further.