Religion News Service
NEW DELHI (RNS) The government commissioner charged with promoting "Gross National Happiness" in the tiny Buddhist nation of Bhutan said he was deeply dismayed by a recent study that found a majority of Bhutanese women think their husbands have the right to beat them.
Karma Tshiteem, head of Bhutan's Commission for Gross National Happiness, called the findings "surprising" and "shocking," and said such attitudes are "totally inconsistent" with Buddhist teachings.
The survey by Bhutan's National Statistics Bureau found that roughly 70 percent of women say they deserved beating if they neglect children, argue with their partners, refuse sex or burn dinner, reported the Business Bhutan newspaper.

The acceptance of domestic violence is highest (90 percent) among the women in Paro, a picturesque valley that's home to Bhutan's most revered monastery, Takshang. The capital city of Thimphu scores the lowest acceptance rate, about 50 percent, for wife beating.

"Any form of violence is totally contradictory to the teachings of the Buddha," Tshiteem said, noting that Ahimsa (non-violence) "is a central tenet in Buddhist philosophy."

Mahayana Buddhism is the state religion of Bhutan, where a vast majority of the 700,000 citizens are Buddhist.

Gross National Happiness, which seeks to create an "enlightened" society in which government fosters the well-being of people as well as other "sentient beings," was first envisioned by Bhutan's former King Jigme Singye Wangchuck in 1972.

The landlocked Himalayan nation -- about half the size of Indiana -- peacefully transitioned to democracy after the king abdicated power in 2006, but Buddhist principles continue to shape the country's government. 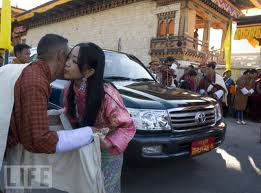 Because healthy family relationships are key to harmonious communities, "attitudes accepting such behavior, in these relationships or even outside, would be totally inconsistent" with Gross National Happiness, Tshiteem said.

Covering 15,000 households, the Bhutan Multiple Indicator Survey also found that more than one in four women believe HIV/AIDS is transmitted supernaturally; one in four children do not attend school and one in five children are involved in child labor.

Situated in the Himalayan region between India and China, Bhutan is a poorly developed country. Surprisingly, the country was ranked the 8th happiest country on the list of happy countries in the world compiled by University of Leicester. Low literacy rate, low rate of industrialization and zero exposure to foreign culture have enabled the country to keep its domestic culture and natural beauty intact.The irony is that the women of this happy country are not so happy because domestic violence is very common in Bhutan.
The worst thing is that the women who are victims of domestic violence do not go to the police. They are afraid of losing respect in the society. In many cases, women are illiterate and entirely dependent upon their husband for financial support. In addition, many women can not leave the family for their children. Silently they tolerate the brutal torture of their husbands. Kuensel Online reports:
“Most Bhutanese women just won’t shout for help, no matter how severe it gets,” said an observer. Bhutanese women, as in other countries, says Thimphu referral hospital’s Dr. Pakila Drukpa, do not want to come out in the open for various reasons. Factors like children’s welfare, fear of breakdown of marriage, and an innate embarrassment that relatives and others will come to know, influence their decisions, said Dr. Pakila.
The worst affected are those who were economically dependent on their husbands, said a spokesperson of RENEW, a non-government organisation, which provides support and services for victims of domestic violence.


The good thing is that the situation is changing. With the gradual spread of education and various NGO’s, women especially those who are living in urban areas have become conscious. Now, they seek legal counsel against domestic violence. The queen of Bhutan, her majesty Ashi Sangay Choden Wangchuck, established an organization named RENEW which deals with domestic violence. 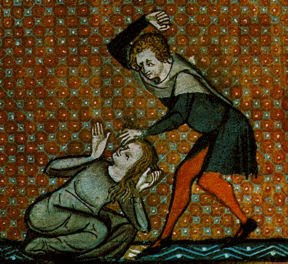 Domestic violence can be more or less found in almost all the countries of the world but it is more common in under-developed countries. Last year, Razib Ahmed published another post about the crown prince of Nepal abusing his wife.
One of the major reasons the abusive husbands go unpunished in countries like Bhutan is that the social system and customs support men. Creating law against home violence is not enough. It has to be made sure that the law is strictly observed and at the same time awareness against violence has to be raised among women.