Experiments With Democracy in Bhutan 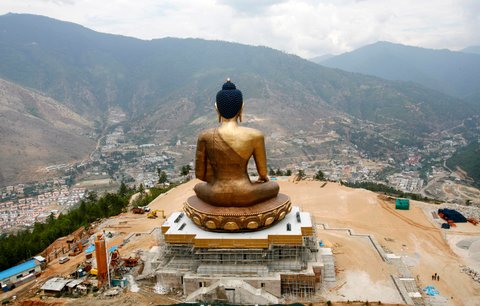 Singye Wangchuk/ReutersA statue of Lord Buddha at Kuensel Phodrang in Thimphu, Bhutan on May 20, 2012.
Bhutan does things differently in South Asia, and nothing illustrates this so as much as the way it has conducted its transition to democracy.
In December 2007, I was driving from Thimpu, the capital of Bhutan, to Paro, a small city 50 kilometers (30 miles) south of the capital. Along the way, just before a bridge spanning the river, I noticed a small bulletin board and saw my first election posters in Bhutan. The board was around two meter square, and a few neat A4-size election posters and notices by Bhutan’s Election Commission were pasted on it.
Coming from India, Bhutan’s closest ally and neighbor, this was bizarre. We are used to colorful campaigns, election posters casually pasted everywhere, defying any size regulations, and often accompanied by graffiti smeared over walls and buntings all over the place. Bangladesh, Sri Lanka, Pakistan and Nepal campaign in the same way, but in Bhutan, democracy has come in a measured, prescribed manner, with strict rules, one of them being not to litter the countryside with posters or graffiti. 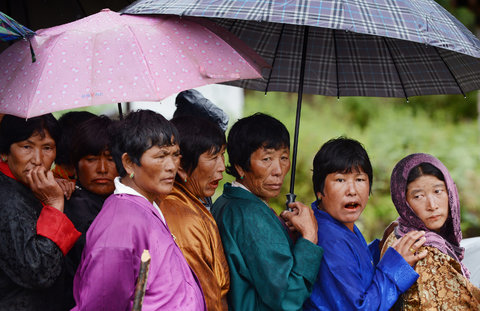 Roberto Schmidt/Agence France-Presse — Getty ImagesBhutanese villagers waiting to vote outside a polling station in Paro on May 31.
The designed nature of Bhutan’s democracy is the direct outcome of the decision by Bhutan’s fourth king, King Jigme Singye Wangchuck’s decision to voluntarily hand over power to his people, and this is what makes it so very special. The test of how well established this new democracy has become is the second general election currently taking place in Bhutan, its first round completed on 31 May 2013, and the final round on 13 July 2013.
In April 2007, to help the Bhutanese understand the concept of voting for political parties, a mock election took place. Four “parties” were supposed to contest the elections, the Druk Blue Party, the Druk Green Party, the Druk Red Party and the Druk Yellow Party. Each color represented a certain value: blue for fairness and transparency, green for environmental concerns, red for development and industrialization, and yellow for traditional values. The Druk Yellow Party won 46 out of the 47 seats in the mock elections. It might have been a mere coincidence that yellow is the closest color to the saffron scarf worn by the kings and the Je Khenpo, the chief abbot of Bhutan.
In Bhutan’s first general election, held in 2008, the Druk Phuensum Tshogpa, loosely translated as the Bhutan Peace and Prosperity Party, achieved a similar dominance, winning 45 out of 47 seats. The rival People’s Democratic Party had one-third of the votes, but the winner-take-all system rewarded them with only two seats.
Tshering Tobgay, who went on to become the opposition leader in Parliament, was one of the first people to enter into politics, retiring from the prestigious post of Director at Ministry of Labor and Human Resources to serve his king and country by following the king’s wishes to set up a democratic fray by joining Bhutan’s first political party, the PDP, when it was formed in August 2007.
“Serving the nation has been a very important part of our culture,” he told me. “In Bhutan we call it serving Tsa Wa Sum,” which is often translated as “king, country, people.”
In the case of Mr. Tobgay, he defined his obligation as a family tradition. His father had been one of the raw recruits that the third king of Bhutan had recruited in the 1950s to build Bhutan’s first official standing army, and his mother had been one of the workers on the first modern road linking Bhutan to India. They met when the young soldier walked down the road to get supplies. Their meeting and marriage came about because of their service to their nation and their king.
Stories like this give us a sense of the popularity of the monarchy in Bhutan, and illustrate how truly different its transition to democracy has been.
We are used to democratic rights being snatched from the hands of desiccated dictators or vile monarchs, but there are remarkably few instances of an autocrat voluntarily devolving power. The fourth king of Bhutan, Jigme Singye Wangchuck, was enormously popular, and at the time of hisabdication in 2006, he was only 51 years old, making him younger than most politicians in their prime. There was no challenge to his rule, and that is precisely when he put in place the process that would eventually replace him, and a monarchical system, with a constitutional democracy.
Bhutan’s experiments with democracy have been a qualified success. The standards of living have risen during the rule of the Druk Phuensum Tshogpa, headed by Jigmi Yoezer Thinley, the first elected prime minister. Road connectivity, Internet connectivity and basic health indicators have gone up. Yet political machinations, allegations of corruption and wrongdoing by political leaders have also accompanied the advent of democracy. The home minister and the speaker of the Parliament were convicted on 8 March 2013, the day after the first Parliament finished its term, on the charges of corruption. The High Court has upheld the verdict, and they are currently appealing their conviction in the Supreme Court. 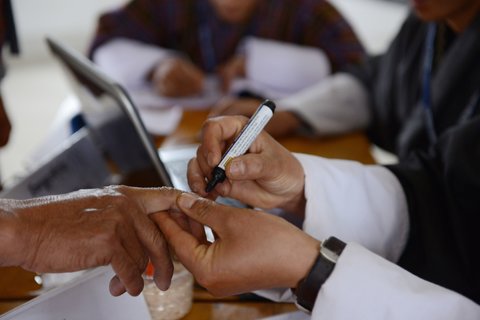 Roberto Schmidt/Agence France-Presse — Getty ImagesA Bhutanese voter getting his finger inked before casting his vote at a polling station in Paro on May 31.
The real test of democracy is always the second election, and Bhutan is currently in the middle of this grand process. In Bhutan, there are two rounds of elections, and the first ended May 31, with four political parties contesting. The two parties with the biggest vote share – the Druk Phuensum Tshogpa, which received about 40 percent of the vote, and the People’s Democratic Party, which received just over 30 percent – will face off on July 13.
There would have been five parties contesting, but according to Bhutan’s Election Act, every political party has to be a national party, fielding a candidate from all 47 constituencies, and every candidate has to have a university degree. The Bhutan Kuen-Nyam Party was disqualified by the Election Commission after the party had failed to find candidates with a university degree in the district of Gasa, which has a population of just over 3,000 people.
In a generous move that exemplifies the spirit of serving Tsa Wa Sum that has marked Bhutan’s transition to democracy, the four parties each sent a communiqué to the Election Commission asking it to reconsider the disqualification. Sonam Tobgay, the leader of the Bhutan Kuen-Nyam Party, said, “Four parties appealing for the fifth party, who couldn’t qualify, is something unprecedented universally and internationally, something special and noble.” Nevertheless the Election Commission refused to reconsider its decision.
For a small country the size of Bhutan, with a population of 700,000, internal cohesion is a prime security concern, and if a border region, no matter how small or remote, is neglected in any way, it is a threat to the country. In fact, the Bhutanese value unity so much that they had to invent a word for “opposition leader” because all the words implying dissent had a negative connotation.
Transitions to democracy are often violent and exact a terrible price from a populace. Bhutan’s rare example of managing this transition peacefully, and in a stable manner, makes it incredibly special and adds a profound meaning to its nascent democratic exercises.
Omair Ahmad is an author, most recently of “The Kingdom at the Center of the World: Journeys into Bhutan.” His novel “Jimmy the Terrorist” was shortlisted for the 2009 Man Asian Literary Prize and won the 2010 Vodafone Crossword Book Award.