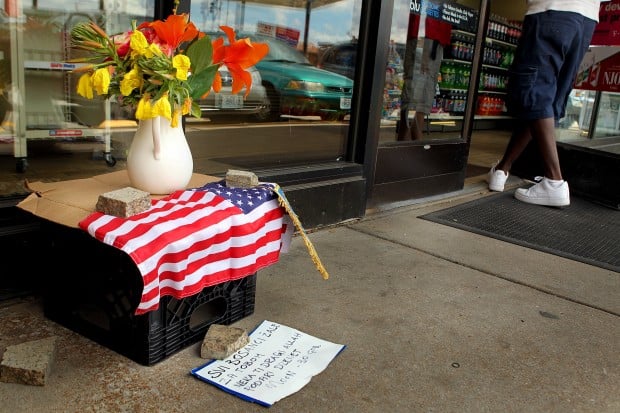 A memorial dedicated to 7 Eleven store clerk Mon Rai sits outside the store at Gravois Road and Bates Street on Monday, June 10, 2013. Police said a gunman walked into the store and shot Rai early that morning. The memorial was made by a frequent customer who is Bosnian. Photo by Christian Gooden, cgooden
Mon Rai told friends, customers — anyone who would listen — that he was going to be the father of a baby girl. He told his manager at the 7-Eleven where he worked in south St. Louis that his overnight Monday shift would be his last for a while so he could spend time with his wife, who is expected to give birth any day.
About 12:30 a.m. Monday, a gunman walked into the store at Gravois Avenue and Bates Street and fatally shot Rai, a Bhutanese refugee who moved to St. Louis nine months ago.
Customers found him in an aisle, shot in the back. Police said nothing was apparently taken from the store, including money from the register, but employees are taking inventory.
For years, Rai had dreamed of coming to the U.S. He lived 19 of his 29 years in a refugee camp in Nepal, where there was a perpetual shortage of food, no toilets and poor medical care. He, like thousands of people from Bhutan, were forced to flee the country over cultural and religious differences and live in refugee camps throughout Nepal.
Rai came to St. Louis with his wife, Susila, 25, and their son, Sujal, 7, on Sept. 5, 2012. Six months earlier, his parents, brother and sister arrived here.
“I hoped it would be a better life than in the refugee camp in Nepal,” Rai wrote in an essay for a Thanksgiving program at the International Institute last year, two months after his arrival.
“When I came to St. Louis ... my heart was full of hopes and dreams.”
The International Institute is the region’s primary agency for resettling refugees. It’s where Rai was taking English classes and helping serve as interpreter for other Nepalese refugees.
“All of us at the Institute are devastated,” said Anna Crosslin, president and CEO of the International Institute. “He was somebody who worked hard to get others resettled as well.”
The personable Rai was excited about the birth of his daughter, Crosslin said.
“A first child born in America is a big occasion for refugees,” she said. “It symbolizes the start of a new life. In this case it’s tragic because this life starts with the passing of another.”
Rai lived with his family in a duplex in the 3800 block of Dunnica Avenue, where neighbors and friends stopped by throughout the day Monday to offer condolences.
“They’ve been crying all day long. They can’t believe it. They still hope he is coming back,” said Ranga Nepal, a caseworker for Rai and his family at the International Institute. A family spokesman said the family needed time to grieve for a few days before making a comment.
In his essay, Rai wrote about the struggles of settling in St. Louis, including language and culture. But the biggest challenge, he said, was finding a job. That’s why he was delighted to start his 7-Eleven clerk job three days after Christmas, Nepal said.
The convenience store was abuzz with activity Monday afternoon. Just outside the front door, a regular customer set up a memorial, using a milk crate as the base, draping it with an American flag and placing a pitcher with multicolored flowers on top. The man, who is Bosnian, also included a blue and yellow flag from his home country.
Late in the afternoon, Joseph Duke stopped by to drop off a bouquet of yellow and white roses at the memorial.
Duke lives nearby and is a frequent early morning customer, getting coffee on his way to work.
“He was very cheerful,” Duke said of Rai. “He talked about the kid. Said it was going to be a girl.”
Duke said he could not understand the violence, especially two convenience store shootings in St. Louis less than two weeks apart. In both cases, a refugee was fatally shot.
“Our neighborhood’s better than this,” Duke said.
Duke also knew Haris Gogic, 19, the Bosnian man killed in a robbery at his family’s Quick Stop convenience store at Chippewa Street and Alfred Avenue on May 31.
“My daughter went to Bayless High School with him,” said Duke, 45.
The two stores are about a mile apart on foot. Police said there was no reason to suspect the shootings were related.
“We have no other witnesses, and we believe only one suspect was involved” in the shooting of Rai, said Police Capt. Michael Sack. “We’re working on pulling surveillance video ... It’s just wide open right now.”
Police on Wednesday charged Joseph Fox, 23, of north St. Louis County, with murder in the death of Gogic. He is being held without bail.
St. Louis is home to more than 1,000 Bhutanese, who began resettling here as refugees in 2008.
“I am so glad to be here in the United States,” Rai wrote in his essay. “I will be a good citizen and help those who are in need of help.”
A fund has been set up at Southern Commercial Bank to help Rai’s family with expenses for his funeral — and to take care of his new daughter. Police are asking anyone with information to call CrimeStoppers at 1-877-725-8477.
Joel Currier and Christine Byers of the Post-Dispatch contributed to this report.