Conference to initiate the translation of Kanjur into English ends 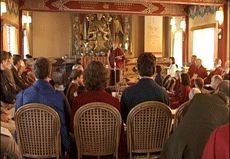 March 21:The five day landmark conference to translate the teachings of Lord Buddha –the 108 volume kanjur into English ended yesterday. The conference was held in the tiny village of Bir in northern India.

The translation will be done under the guidance and leadership of His Eminence Dzongsar Jamyang Khyentse Rinpoche.

Dzongsar Jamyang Khyentse Rinpoche who initiated and hosted the conference at Deer Park Institute in Bir said the survival of Buddha dharma could depend on the Kanjur being translated in other languages which will make the teachings of the Buddha available to millions of people.

The conference decided that they will complete the monumental task of translating the Kanjur into English in 25 years. It was also decided that in one hundred years, they will translate and make the entire Buddhist literary heritage universally accessible.

Already, enthusiastic expression of support has been received from all parts of the world, with more than 11,000 people sending letters of appreciation to translators in the conference. Among the letters, the appreciation letter sent by the Prime Minster of Bhutan, Lyonchhen Jigmi Y. Thinley to His Eminence Dzongsar Jamyang Khyentse Rinpoche was also read out at the conference on Thursday. In his message, the Prime Minister said the translation of the Buddhist text into English will make the sacred words of Buddha available and accessible to countless number of people. He said it will also benefit the people of Bhutan especially the youth most of whom have come through the modern education system and therefore cannot understand Chhoekey.

Lyonchhen Jigmi Y. Thinley said the task is enormous and daunting. However with best scholars and practitioners translating under the personal guidance of His Eminence the Dzongsar Khyentse Rinpoche, he is confident that this venture will meet with success.During the conference the translators also made plans to train more qualified translators, improve their tools and resources, and strengthen collaboration between western translators and Buddhist lineage masters and teachers.