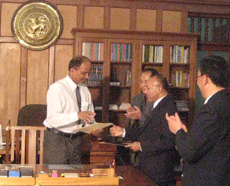 March 30: The Peradeniya University in Sri Lanka will take between five to 10 Bhutanese students every year to study medicine. An agreement to this effect was signed by the Education Minister Lyonpo Thakhur Singh Powdyel while he was in the Sri Lankan capital Colombo to attend the first meeting of SAARC Education Ministers this week.

The agreement will be implemented for five years initially.

While in Colombo, Lyonpo Thakur Singh Powdyel also had bilateral meetings with his SAARC counterparts and discussed possibilities of collaboration in areas like Fine Arts for Bhutanese students in Bangladesh.