65 months: left for his freedom

Countdown for the release of jailed journalist Shantiram Acharya

A budding journalist Shanti Ram Acharya, was arrested by the royal Bhutan police on the charge of taking photographs of a police outpost from a distance and on various suspects related to the actions which he had never done. The unfortunate boy was sentenced to seven and half years to prison.

Mr. Acharya 20, was five when the Bhutan government coerced his parents to sign a called Voluntary migration form, as the part of the sinister design of the drukpa regime to reduce the political opponent from the south in early 1990s. He grew up in the refugee camp with other refugee kids. That was his life. The education in the camp ends after middle high school. He pulled himself ahead. He completed higher secondary from local college and admitted himself to Mechi Campus /college in the BA course taking English and economics as his major. This was his turning point. He was in a different situation, with the local Nepali students who were curious to share the stories of a refugee student from Bhutan. These have changed his mind. As in any people, more so in the youth, it is a dire feeling to be in and to see one's birth place. Similar situation changed his course of imagination. He started walking to wards his birth place, to see it, meet the family members and relatives, back in village who had separated due to the movement.

Unfortunately, it coincided with a bad time. Weeks ago, there were serial bomb blasts in the border towns of Bhutan, the clueless defense and intelligence system were alert and looking for some one to crown the blame and regain their reputation. They caught Acharya on his way to his village. The police put all possible blames on this boy and declared successful in catching a bomb implanter.

After eight week long police treatment in the army barrack, Mr Acharya was produced before court on March 16, 2007. He was charged for taking Photographs of a police out post.
The common people and the people in the government who are made to believe that Mr Shatiram had an ill intension and all the blasts were carried out by this pilgrim, are requested to think from a different perspective. The people must accept that it is a reverent feeling to visit and see one’s birth place and meet the relatives. It must be a source of inspiration for the people, that after 15 years of inhumane life in the camp he still had the respect and longing for the country. Every head must bow before such passion.

If he was to be punished, it must have been for trespassing through forbidden land, nothing more than that. Looking at the court verdict, there are serious questions that arise. The government must make provision for his studies. He can be assisted to join correspondent classes and given permission to attend exams.

As the court could not find any evidence of Mr Acharya’s involvement in the criminal activities, beyond suspicion, he must be treated as the political prisoner. 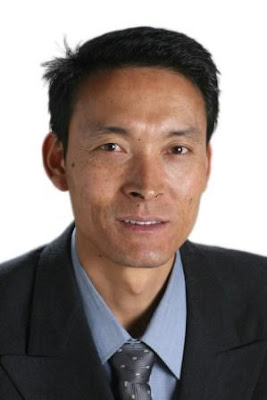 Pema Rinzin
Mr. Pema Rinzin (in the photo), is a senior Assistant Attorney General working in the Office of the Attorney General. Mr Rinzin was also a member of the team that worked on the accession of Bhutan to the WTO. He has a B.A. (Hons) Degree from Delhi University, an LLB from Bombay University in India and an LLM from the National University of Singapore. He served as a member of Advisory center for WTO law, ACWL,for two years starting from 2007. Upon completing his secondment in 2008, Mr. Rinzin returned to his position in the Office of the Attorney General.
After winning the case, Pema Rinzin apologized to Shantiram and said, “I am sorry to you but I had to do it”.

The court case of Shanti Ram was handled by:

Shanti Ram Acharya was arrested by the RBA duties at the Tashilakha Outpost, while he was found taking photograph of the RBA out-post with a digital camera. By undergoing militant training, conspiring, preparing, planning and aiding terrorists to carry out subversive and terrorist activities against the Tsa-Wa-Sum, Shanti Ram Acharya has violated Sections 125, 127, 329 of the Penal Code of Bhutan, 2004.

Details:
Police report says: he was not in possession of camera or any photo taking devices.

According to Penal Code of Bhutan 2004, the said articles read as below;

Criminal conspiracy
127 A defendant shall be guilty of criminal conspiracy to commit a crime, if the defendant agrees with another person or persons that they or one or more of them will engage in a conduct that constitutes a crime.

Terrorism
329 A defendant shall be guilty of the offence of the terrorism, if the defendant:
a. with intent to subvert the state, uses, assists, recruits or trains another person to use a bomb, dynamite, firearms or other lethal weapons for terrorists activities;
b. Participates in financing,, planning, or preparation of terrorists acts or in supporting terrorist acts directly; or
c. Engages in a violent act or insurrection against Bhutan that is designed primarily to generate fear in a community or a substantial section of the society.

Mr Acharya was accused of taking photographs of the outpost, but the police could not find a camera or any photo capturing devices in his possession.

Find details here: Media in Bhutan
Posted by Oh My GOD at 12:22 AM