12 February,2009-Bhutan and Nepal must work together and have discussions to work out the issues of resettlement of people in the camps of Nepal, said US assistant secretary of state for the bureau for south and central Asian affairs, Richard A Boucher, who was on a three-day visit to the country from February 9-11.

Mr Boucher said he had come to congratulate the people of Bhutan for a successful transition to democracy and also to discuss issues between the two governments in order to strengthen the existing relation. This visit was a part of his tour to the region that included Bangladesh, India and Nepal. 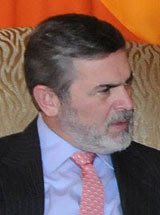 Mr Boucher, who is visiting Bhutan for the second time after his first visit in November 2006, said that he will be visiting Nepal on his way back and would discuss the same issue with the Nepalese government.

Mr Boucher, who met the Fourth King and the prime minister yesterday, said that he had a good discussion on development issues with the prime minister. “Issues like information and technology, hydropower projects, tourism, education, the process of democracy and other issues of interest between the two nations were also discussed,” he said.

Although no formal diplomatic relations exist between the two countries, the assistant secretary said that there were a couple of elements that the two can work with. “In fact, we can do a lot together.” He also said that he wanted to know of the plans and developments in the country from his visit.

“Such high level visits will help enhance relations between Bhutan and the United States,” said a foreign ministry official.

Mr Boucher was conferred the personal rank of Career Ambassador, the highest achievement for a member of the US foreign service, in June 2008.

By Tandin Wangchuk
Posted by Oh My GOD at 12:11 AM