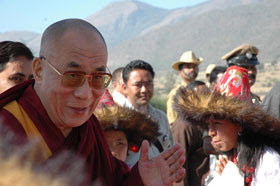 Dharamshala: The centre for higher studies for the Tibetan college students established by the Tibetan Childeran Village near the south Indian city of Bangalore, was today inaugurated by His Holiness the Dalai Lama as “The Dalai Lama Institute for Higher Education”.

The college, located on Mysore road, some 27 kms from Bangalore city, will initially house about 500 students and eventually increase to 3000 depending on the availability of funding.
With a prime mission to inspire Tibetan students to learn Tibetan language and culture, the college will provide a broad spectrum of study curriculum, including science, arts, counselling, computer and information technology.
The college will provide the necessary environment where Tibetan youth would not only receive opportunity to learn the various academic subjects, as in any other college in the world, but they will learn Tibetan language and culture.
The college started its first academic session with the teachers’ training course in August 2008 with 71 students and 13 staff members.
Dr G Parameshwar, former minister of state for higher education and Mr Kunga Dorjee, chief representative for Tibetan settlements in south India and other officials associated with educational institutions were present at the ceremony marking the unveiling of new name for the college.
Around 3000 people, including Tibetans from the nearby Tibetan settlements and some 300 students from Bhutan studying in Bangalore attended the function.
In his address, His Holiness the Dalai Lama expressed his gratitude to the state government for its support in facilitating the establishment of Tibetan settlements, important centres for learning Tibetan religion and culture in south India.
His Holiness told the Bhutanese students to study Tibetan Buddhism, emphasising that the teachings of Buddha (Kangyur and Tengyur) form the basis of the spiritual learning for both Tibetans and Bhutanese. 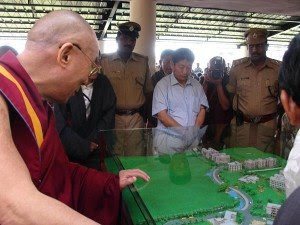 Lauding the Tibetan Children’s Village for its effort in establishing the pioneer institute of higher education, Dr Parameshwar expressed his hope that the same college academic curriculum will be carried on by the Tibetan educational institutions in future Tibet.
Dr Parameshwar donated a sum of Rs 5 lakh to the institution. He presented certificates to the first batch of 17 students who completed their teacher training course.
On behalf of the administration, Mr. Ngawang Dorjee, principle of the college, extended his gratitude to all the donors for their invaluable contributions.

Source: Northern Voices online
Posted by Oh My GOD at 1:10 AM