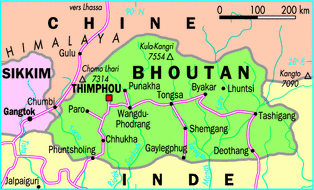 Langthab or bullfight at a National Day celebration
The onslaught of modern sports has pushed traditional Bhutanese sports into the background. Sonam
Rinchen reports.

Tomorrow, if you find sheray paray as strange a term as kangril is today, don’t be surprised. Names of some traditional Bhutanese sports are already out of the vocabulary of younger generation. It is happening especially among urbanites.

According to Pema, an elderly Thimphu resident, not long ago, Bhutanese were more into traditional sports such as jigdum, sheray paray, pungdo, khuru, degor, langthab, keshay and soksom during special occasions and losar. Not any more.

“Few people know about sheray paray today,” said Dawa, 68, who looks after an apple orchard in Thimphu. “When I was young and herding cattle in the forests of Mongar, I used to challenge my friends in bouts of sheray paray.” He added that whoever won would become the leader of cowboys. Sheray paray is an exclusively men’s game where one person grips his opponent’s wrist while the opponent tries to shake off the grip. If the gripper manages to hold on, he wins. But if he is shaken off, he loses the game. 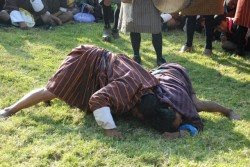 Langthab or bullfight is a game of brute strength where two opponents challenge head-on and butt each other to submission. Kinzang Dorji, 48, a farmer from Tsakaling in Mongar, said langthab was popular when he was a child. He added that, the game required a stone-like skull. “We would challenge our friends until we feel giddy,” he said. Soksom is a javelin-like game where a long, slender bamboo spear is thrown at a target placed at a distance. “I heard of soksom but I never saw anyone playing it,” said Ngawang Yeshey, a class X student of Dechenchholing Middle Secondary School in Thimphu. He added that he thought that the one who could throw the spear the farthest won the game.

Dorji, a private employee in Thimphu, who comes from a remote village in Mongar, said that jigdum and soksom are traditionally considered to be the sport of cowboys. “Since they were the only entertainment for them, the sports became popular among cowboys,” he said.

Mindu Dorji, a middleaged private employee, said, “In my school days in Sha, Wangdue, we used to play jigdum and soksom since we didn’t have other sports facilities.”

Playing degor involves throwing a pair of pancakelike flat stone at a target about 18 to 20 metres apart. The target is a small stick driven into the ground. If the distance between the target and the stone can be covered by thumb and middle finger of an outstretched palm, one gets a point.

Khuru is a dart game played with targets set 20 metres apart. It is one of the few traditional sports seen played in urban areas during festivals.

khuru and degor are generally associated with monks in dratshangs. Tashi Tshering, a Thimphu-based businessman, said that today, these games are rarely played by students.

Pungdo or shot put is also among the dying traditional sports.

In most of the traditional Bhutanese sports, women take part as cheerleaders, mockers and singers. While modern games encourage more woman participation, some of them such as video games, are not healthy.

Meanwhile, while our youth watch choreographed wrestling matches on television, the traditional keshay is relegated to special occasions.