Tom and Jerry in Bhutan Border

The security personals in India (Assam, Bengal and Arunachal) know well how to play Tom and Jerry with the Bhutan's intelligence system. Time and again they frighten the Bhutanese side, offer pseudo help to reduce their tension, bargain for something else and go away with it. The central's bureaucrats and politicians are clear in their policy that the problem between Bhutan and its communist parties is Bhutan's internal matter, but the Bhutan's neighbouring states' facing militant guerrillas need the support of their counterparts in Bhutan. To get it easily, they inject various hypothesis, arouse fear and make them slave to their sinister design.

This is another fresh attempt:

4 February,2009 - Bhutan and India have agreed to further strengthen and enhance security arrangements. This comes after the Indian delegation for the recent Bhutan-India border meeting said that they had information on links between the Communist Party of Bhutan and Indian insurgent groups like ULFA and NDFB.

“Mr K L Tamta said had he had reliable information that ULFA, NDFB and KLO have linkages with the Communist Party of Bhutan and that there are every chances that any incident could take place at any time,” said director Karma T Namgyal. The director said that, based on this information, Bhutan had to be cautious.

The Indian inspector general also informed the Bhutanese side that, since the government of Bangladesh was taking stern action against the insurgent groups taking shelter there, this nexus of groups might try to infiltrate Bhutan, especially in the Manas area.

“This statement was further supplemented by the head of the Indian delegation, the commissioner of Jalpaiguri, Mr Surendra Gupta, who said that whatever the IG had presented was a very true, big and worrying issue for them as well as for Bhutan,” said director Karma T Namgyal.

The commissioner has requested that Bhutanese government to take notice of the issue and do something about it.

“The district magistrate of Darjeeling, B L Meena, did not table the issue specifically, but he did mention to me that there is definitely some threat and linkages between the Gorkha Jan Mukti and the Bhutan Communist Party,” said director Karma T Namgyal.

Director Karma T Namgyal said that the two governments had always been exchanging information and Bhutan had been receiving information on this. He said that, since 2002, these groups have started linking up, according to information from officials from India. The issue also came up among delegation members during last year’s border meeting in Kalimpong, West Bengal.

The director said that the government would definitely be doing something and take it up in meetings with higher authorities and further enhance security measures and preparedness.


2 February, 2009 - The government of West Bengal state, India and Bhutan will identify vulnerable entry and exit points and provide extra vigilance in view of the infiltration by the Indian insurgent groups and the Communist Party of Bhutan.

This was decided during the 19th border districts coordination meeting held in Thimphu earlier this week. The officer in charge along the Indo-Bhutan border towns would strictly access these points and strengthen the security.

Officials from Bhutan lead by the head of the Law and Order Bureau under the home ministry, Karma T Namgyal, and seven high level officials from India lead by Jalpaiguri Division Commissioner B.L Meena attended the two-day meeting at hotel Druk. 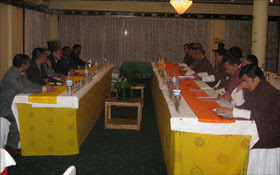 Police Inspector General of North Bengal region, Mr Kundanlal Tamta, told Kuensel that 10,000 youth known as the Youth Communist League from the camps in Nepal has been a threat to India as well as Bhutan causing disturbance from time to time. He said that the youth were trained by Bhutan Tiger Force.

Mr Kundanlal said that the 197 kilometres long North Bengal and Bhutan border is guarded by 37 border outpost Sima Sewa Bal (SSB) working hard to stop the infiltration of militants. “We have to safe guard both the Indo-Bhutan border as well as the Indo-Nepal border,” he said.

With the new government in Bangladesh indicating non-tolerance of any militant activities in their country, the Indian government had cautioned that these militants in Bangladesh might infiltrate in to India and Bhutanese territories because of the open and porous nature of the border between the two countries. The government has agreed to put in action all possible efforts to prevent the infiltration.

The committee would hold periodic meetings to view the perceptions of threat from the militants. The Bhutanese high officials assured that Bhutan would never allow Indian insurgent groups to carry out activities that are of disturbance to the Indian interest.

Both governments also decided to hand over national offenders who had crossed the border after committing crime. “The officer in charge at the border towns will have full authority to informally hand over the criminals to their respective nations,” said Mr Kundanlal adding that past formalities took time.

The meeting also discussed identification of new entry and exit gate between Phuentsholing and Jaigaon, exchange of information on fake currency operators of the two countries, review of progress on mitigation of adverse affect of dolomite mining and, poaching/smuggling of forest products by Indian and Bhutanese collaborations and illicit felling of trees and their removal on either side.


By Passang Norbu
passa@kuensel.com.bt
Posted by Oh My GOD at 8:25 PM