Himalayan glaciers' melting poses threat to not only Bhutan, but entire South Asia

Turkmenistan News.Net
Friday 23rd October, 2009 (ANI)
London, October 23 : Reports indicate that the melting of the Himalayan glaciers is threatening the kingdom of Bhutan, the impacts of which will adversely affect the entire South Asian region. 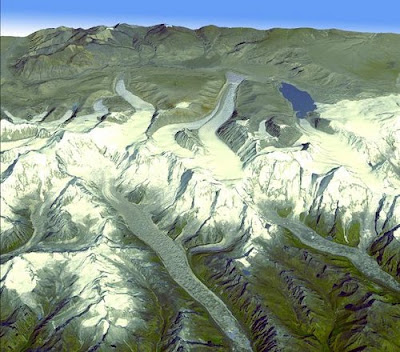 According to a report in Nature News, glaciers in the Himalayas are retreating faster than in any other part of the world and they could disappear completely by 2035.

This puts the mountainous nation of Bhutan at a special risk.

In an area smaller than Switzerland, it has 983 glaciers and 2,794 glacial lakes, some of which have burst to produce deadly glacial lake floods.

As a poor nation without even its own helicopter, Bhutan lacks the resources to combat global warming.

It is carrying out the work at Thorthormi glacier with the help of money from various international donors.

As the first nation to get adaptation money from the Least Developed Countries Fund, Bhutan is something of a pioneer among developing nations in their quest to adapt to a warmer future, and the struggles at Thorthormi glacier illustrate the enormous obstacles that adaptation efforts still face.

It is only within the past decade that researchers realized that Thorthormi could pose a threat.

Thorthormi's ponds were expanding and merging to form larger bodies of water. The changes have been dramatic even in the past few months.

"Just before we started our work here in July this year, that part of the lake was water," said Karma Toeb, the project's glaciologist and team leader, pointing down to a number of icebergs. "The ice blocks have been breaking off the mother glacier upstream," he added.

According to Thinley Namgyel, the deputy chief environment officer at the National Environment Commission in Thimphu, "A few decades down the line, the glaciers will retreat and we are not sure what impact it will have on the economy."

But, the impacts of the melting of the Himalayan glaciers will reach far beyond Bhutan's borders.

The glacier-fed rivers that flow south from the Himalayas are the arteries of south Asia.

It is estimated that the retreat of glaciers will affect the water supply of roughly 750 million people across South Asia and China, according to Rajendra Pachauri, the chairman of the Intergovernmental Panel on Climate Change (IPCC).

Across Asia, there are countless cases like Thorthormi, where the needs are great and the resources scarce.

Regarding the effects of climate change and their costs, "every single estimate that people have come up with has been exceeded by reality", said Pachauri.

"The impacts of climate change are clearly turning out to be much worse than what we had anticipated earlier," he added.
Posted by Oh My GOD at 4:27 AM