School Back After 19 Years with One Teacher

A one man show
Written by SONAM YANGZOM
For the last four months, he has been single-handedly running a school of 63 students. And all this while, he has been multi-tasking as the bell-ringer, gardener, administrator, supervisor, and teacher in-charge of the school.

D.B. Tamang is the only teacher of Gong Community Primary School (GCPS) under Jigmechoeling gewog in Sarpang dzongkhag. 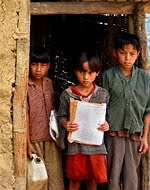 GCPS has 63 students studying in two sections in Pre-primary level and these students will be the first batch to study in the first standard next year. Of the 63 students 25 are boys and 38 are girls, most of them between six and 14 years of age.

D.B Tamang’s first task was that of the administrator. He started by buying files, furniture and other necessary requirements for the school. He had to then enroll students, talking to parents about the benefits of education.

After the school started, D.B Tamang got another job responsibility- that of the peon. He would rush to ring the bell so that classes could be divided into periods and to give a feel that it is indeed a school like any other with a bell.

However, he has been lucky enough to get help from the non-formal education (NFE) teacher to teach dzongkha and EVS (environmental studies) to the students. The NFE teacher also teaches dzongkha to the villagers after school.

GCPS was shut down for 19 years because of the 90’s anti-national problem. It was reopened in June this year.

GCPS can accommodate 361 students but this year only 63 students were enrolled. About 50 students come from far off villages; most of them have to walk for more than two hours to reach the school.

Some of the students who come from far flung places stay near the school on their own expenses and under the supervision of the teacher in-charge.

Jigmechoeling gewog is the biggest gewog in Sarpang and the farthest from both the dzongkhag and dungkhag office. Although it has 515 households, the pre-primary enrollment is as low as 40.7%.

The Jigmechoeling Gup said the reopening of the school has helped the Gong community a lot. The GCSP is the third community school in the gewog.

Gong is two days walk from Jigmechoeling and it was difficult for the villagers to admit their children to school. “Even if the school is run by one teacher the benefit is huge,” the gup said.

GCPS is not the only school in Jigmechoeling gewog where students are taught by few teachers. Reti Community Primary School has 64 students studying in classes PP to six and has only three teachers (a little better off).

The teachers in Reti Community Primary School do multi-grade teaching where two classes are clubbed together. For instance, the school teaches classes one and six together. The sixth standard students help first standard students.

“It is easier to teach where the higher grade students help students from the lower grade,” said the assistant dzongkhag education officer, Tshering Lhendup.

The education ministry is planning to send two more teachers to GCPS next year so that D.B Tamang can be the principal of the school.

That is a consolation of sorts, but until then, he will have to carry on with his multi-tasking job.
Posted by Oh My GOD at 8:40 PM