Irreconcilable differences with management lead to editorial staff resignations
23 October, 2009 - More than two weeks after the weekly Bhutan Times (BT), the first privately owned newspaper in Bhutan, declared a loss of Nu 5.39 million and underwent a change of management, its editor and six of its 12 reporters resigned yesterday, citing “persistent editorial interference from the management”.

“We’re resigning primarily to protect independent journalism in Bhutan and live up to our professional principles and values,” said editor Gopilal Acharya. He refused to elaborate further. The editor, chief reporter and five reporters submitted a joint resignation letter at 4.10 pm yesterday. The reporters refused to comment.

The resignation letter reads, “Following persistent editorial interference by the management, the following newsroom staff hereby submit our resignation. This is to be taken as a month’s notice from our side, however, our resignation is effective from today.”

The CEO and new chairman of BT, who took over management on October 1, Wangcha Sangey, said they terminated their services themselves, so BT did not have a choice but to comply with their decision. “They were actually conspiring to bring down the company, through which they earned their livelihood for the past three years and got trained,” he said.

Wangcha Sangey said the reason for their resignations was not true at all. “Since I joined, I made one request to them that, while freedom of speech is very important, we shouldn’t forget that we’re Bhutanese and that you can slur a ministry if it’s wrong but not Bhutan as a nation. We shouldn’t be promoting personal agenda.”

When asked whether a court case would follow, as the employees had contracts with the company, Wangcha Sangey said, “I don’t have time to dwell on the contracts and the legality involved.”

Over Nu 900,000 of BT’s money is with the employees in the form of loans, said Wangcha Sangey, adding that those, who had submitted resignations, also owed the company.

Since Wangcha Sangey took over the management, he said that he worked for the interest of the company and the shareholders, with emphasis on improving the financial condition of the company. “We managed to bring down the bank overdraft to less than a million.” BT owes Nu 3m in overdraft loan to the bank of Bhutan.

“What happened was not morally correct and they should have supported the new CEO,” said Bhutan Today’s managing director Tenzin Dorji, adding that it was not true that BT reporters were joining his paper.

The Bhutan Observer editor, Nidup Zangpo, said that this would definitely affect the media scenario in Bhutan. “My immediate reaction was it’s doubtful whether the Sunday issue would come out,” he said.

Wangcha Sangey said that BT won’t disappoint its readers and that it will come out with the Sunday issue. “Even if they feel that they don’t have any obligation to the readers, BT has obligations so I’ll make sure that the issue comes out as scheduled.”

“They didn’t walk out on me but the company. We had too little time to know each other well. They might be planning to come out with a paper of their own, so I wish them luck,” he said.

BT is the only public limited private media company that started on April 30, 2006. Bhutan Observer and Bhutan Today are sole proprietorships. BT has 288 shareholders as of last year, with major shareholders holding 82.26 percent of shares and the remaining 17.74 percent by individual investors. 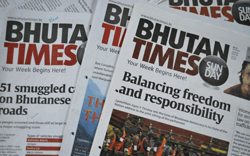 October 22: Bhutan Times, one of the private newspapers, is going through a crisis.

In the latest development, six of its reporters and an editor have submitted their resignation citing persistent interference in the editorial decisions by the management as their reason.

They submitted their resignation late this afternoon.

Bhutan Times editor Gopilal Acharya said their main reason is to protect the independence of journalism in the country and live up to the professional journalistic principles and values.
.............................
Bhutan Observer

Six reporters and the editor of Bhutan Times walked out on the new management yesterday afternoon after tendering their resignation. Gopilal Acharya, the editor, said the editorial team was resigning en masse because of persistent editorial interference from the management. “We are resigning primarily to protect independent journalism in Bhutan and to live up to our professional principles and values,” he said.
However, the paper’s chief executive officer, Wangcha Sangey, who took over the company only a few weeks ago, said, “This is a conspiracy to close the company down.” He said that this week’s issue of the paper would be brought out in spite of a virtually empty newsroom. With seven of the editorial staff having walked out, the paper is left with six reporters, out of which three are undergoing studies in Thailand. With one reporter in the paper’s Trashigang bureau, the newsroom at the headquarters now has only two reporters.
“The company has survived. Just because a section of the company is down doesn’t mean that we have to shut down,” Wangcha Sangey said. According to an outgoing reporter, after the new CEO took over the paper, press releases came to the editor only through the CEO. The CEO also started attending conferences that are more relevant to the editorial staff. “This is the management’s interference in the editorial,” she said.
However, Wangcha Sangey said he “just mentioned to the reporters that they shouldn’t slur the nation”. “If they are not ashamed, I certainly do not have to feel sorry about the decision they have taken,” he said.
The turmoil started when the former managing director of the paper, Tenzin Rigden, was immediately relieved after he applied for a six-month extraordinary leave to the board of directors.
Bhutan Times started as a weekly paper on April 30, 2006, by Bhutan Media Services with Tenzin Rigden as its founding managing director and Tashi P Wangdi as the editor-in-chief. It officially started operating as a public limited company from January 1, 2007.
.................
Posted by Oh My GOD at 4:22 AM