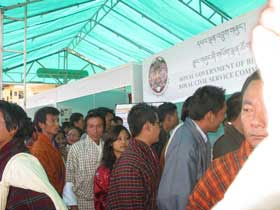 “By the end of January 2010, about 20,217 youth will be seeking jobs”
7th National Job Fair 12 October, 2009 - Of the 91 graduates, who applied for the posts of assistant manager in the food corporation of Bhutan (FCB), two were selected on the spot in the seventh national job fair held yesterday in Thimphu. There were about 9,000 youth looking for jobs.

There were about 9,000 youth looking for jobs.

On offer were 287 job opportunities, in which 21 private companies, six government agencies and 14 corporations participated.

“For the first time, government agencies like the royal university of Bhutan (RUB), royal civil service commission and department of human resources participated in the fair,” said the chief program officer of department of employment (DoE), Tandin Dorji. The agencies are mostly there to provide information and counsel job seekers.

For the employers, the one-day job fair was a great chance. “This is an opportunity for us to select the best,” said FCB’s administrative officer, Pema Wangchuk.

Labour minister, Lyonpo Dorji Wangdi, who inaugurated the fair, said Bhutan’s unemployment rate of 4 percent was a major concern for the government. “By the end of January 2010, about 20,217 youth will be seeking jobs,” he said.

There are 12,900 unemployed youth today and about 70 percent of them are between 15 to 24 years, of which twice as many are female.

“The government is committed in creating sufficient job opportunities for all,” the labour minister said, adding, “We don’t believe in providing jobs for the sake of employment but to provide productive and gainful employment.”

The government plans to create at least 75,000 jobs in the next several years. They will be created in tourism, information and technology, hydropower, construction, financial services, horticulture and manufacturing.

By Tashi Dema
Kuensel
Posted by Oh My GOD at 5:31 PM