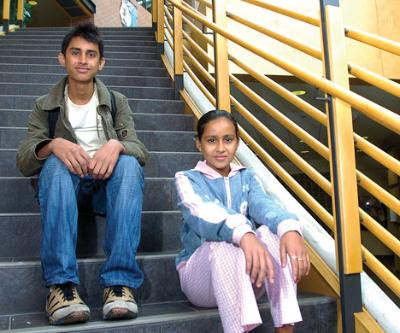 A brother and sister who arrived in the Tri-Cities last year from a refugee camp in Nepal are reported to be doing well in school.
TRI-CITY NEWS FILE PHOTO

0 Comments Bhutanese refugees starting new lives in the Tri-Cities are settling into new schools, learning English and some have secured employment, reports the director of settlement services for an immigrant services agency.

“Generally speaking, they are doing quite well,” said Chris Friesen, of the Immigrant Services Society of BC.

Only 28 Bhutanese refugees came to the Tri-Cities in 2009 out of the 150 expected because families opted to settle in other provinces where they had family and connections.

Canada is expected to take 1,600 Bhutanese refugees from camps in Nepal this year in an international resettlement effort and about 350 could potentially come to B.C. and settle in the Tri-Cities. But Friesen said it’s not known how many will eventually arrive based on experience from 2009.

What is known is that for the next few months the number of refugees to B.C. will slow while the province hosts the 2010 Winter Olympics and Paralympics.

However, accommodations have been made in case more Bhutanese do arrive, Friesen said. A Nepalese-speaking interpreter has been hired to aid with resettlement details, such as finding a place to stay and getting around the community, a Nepalese-speaking doctor has been found in Surrey, and a summer camp that prepared Tri-City refugee students for school will likely go ahead again in July.

A UBC study gave the camp located at Miller Park elementary school a positive review, Friesen said. “So we are keen, and the Coquitlam school board is keen to take the learning from last year and enhance and replicate that for the upcoming summer.”

The Tri-Cities was the third destination for refugee settlement after Surrey and Burnaby in 2009, with 112 people arriving here. In addition to Bhutanese arriving from Nepal, Tri-Cities saw people from Iran, Iraq, Afghanistan, Columbia, Kosovo, Montenegro and Togo move into the community.

To help students settle into the schools, School District 43 has hired settlement workers who speak the languages of newly arriving refugees and immigrants and has received a grant to start a program for older teens recently in the area who need help with English and might be at risk of not graduating.

Tricitynews
Posted by Oh My GOD at 9:56 PM