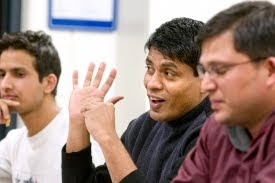 In 2006, Business Week rated the country of Bhutan in southern Asia as the happiest country on the continent.

But for Keshar Khatiwada it was anything but, as he and other endured torture and numerous hardships.

Khatiwada and two other Bhutanese refugees — Durga Dhungana and Nanda Dangal — spoke at an Amnesty International Club meeting Monday night at East Lansing High School. The men talked about their life in Bhutan and their journey to the Lansing area.

They are three of about 400 Bhutanese refugees that live in the East Lansing and Lansing area. The federal government places them in new communities and St. Vincent Catholic Charities — one of many resettlement organizations within the United States — assists families and single adults who are placed in mid-Michigan.

“When the refugees come through we are under federal grant,” said Julie Reynolds Picot, the community relations and marketing director for St. Vincent. “We come in and we greet them at the Lansing airport.”

The group helps the refugees with affordable housing, food and basic household needs for up to two years.

Khatiwada arrived in Michigan 10 months ago.

About 20 high school students and several adults listened as Khatiwada, Dhungana and Dangal told their stories about life in Bhutan and the hardships they faced. In one of many examples, Khatiwada said he was once forced to grow his fingernails out to a length where he could no longer eat with his hands, but had to use his mouth to pick up the food.

“We were given no good job(s) because we (did) not speak the language,” he said, “(Our) frustration went higher and higher. Every day it increased.”

Khatiwada and part of his family left the country when he was 15 years old, traveling first to India and then to Nepal. Once in Nepal, they were placed in a refugee camp. Unfortunately, the situation there was no better.

“It was … horrible,” Khatiwada said.

The camp was overcrowded and the refugees were forced to work in the camp for 40 cents per month, a rate that never changed the 18 years Khatiwada spent in the camp.

Help came in the form of the United Nations High Commissioner for Refugees, who visited the camp and gave multiple refugees, including Khatiwada, the option of several countries they could choose for their new homes.

“I found (the United States) was the best country compared to any of them,” he said. “I want to upgrade my education and to become a strong citizen.”

Last year, 270 Bhutanese were relocated to the East Lansing area, and St. Vincent Catholic Charities reached out to local churches for help.

Mark Cody is a member of Trinity Church in Lansing. He has been helping the refugees out by offering transportation and getting to know refugees who come to his church. He said there have been some barriers for the Bhutanese to overcome but they have acclimated well.

“(The Bhutanese) have a very tight-knit community and we’ve really enjoyed getting to know them as members of the Lansing community,” Cody said.

Email ThisBlogThis!Share to TwitterShare to FacebookShare to Pinterest
Labels: Resettlement