newsPeople14 Jan 10 @ 09:32am by Christine O'Maley
A multicultural Christmas party at KU Childcare Centre Blacktown shows the diversity of new migrants.
AFRICAN refugees might be the most visible on Blacktown’s streets but it was people from Nepal and Sri Lanka who dominated humanitarian settlement in the city in 2009.

According to the Department of Immigration a total of 2152 newcomers called Blacktown home last year.

While the department couldn’t provide a breakdown of where the refugees came from, a local service provider could fill in the gaps.

According to ACL, which works with consortium partner Macquarie Community College to deliver two programs to migrants in Blacktown (the Adult Migrant English Program and
the Integrated Humanitarian Settlement Strategy), the top five intake of refugees in 2009 were of Nepalese, Tamil, Iraqi, African and Burmese backgrounds. 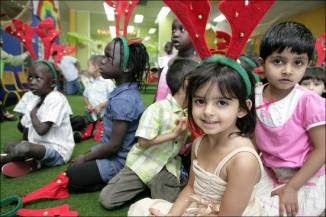 ``The increase in (the arrival of) Nepalese and Bhutanese people has been happening over the past two years in the area,’’ he said.

``There have been Bhutanese in the area for some time and connecting with existing communities is an important aspect of settlement.’’

As there had also been a long established Iraqi community in Sydney the Federal Government had sent refugees to areas where they had the best chance of resettling, Mr Cox
said.

Although many had come from wartorn nations and may bring with them long-term conflicts, he said ``most people welcomed the opportunity to make a new home’’.

``Their feedback is extremely positive in terms of the openness and willingness of Blacktown communities to welcome them and accept them into the community.’’

In 2009, the program was mostly attended by Chinese, Indian, Iraqi, Sudanese and Sri Lankans.

The KU childcare centre downstairs offered the children of migrants the opportunity to learn about their new home while their parents practised English upstairs.

At the end of the year the KU childcare centre hosted a multicultural Christmas party.

As you can see from the photos, the next generation of Blacktown residents come from a diversity of cultures.