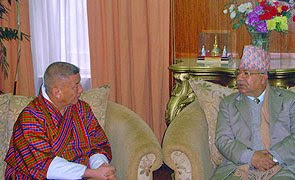 Wangchuk handed over the Bhutanese PM’s invitation at a meeting with PM Nepal at the latter’s residence in Baluwatar this morning.

The up coming SAARC summit is going to be held in Thimpu, Bhutan after Maldives refused to organize the summit citing impacts of global recession. This is the first time Bhutan is hosting a SAARC summit after it was established in 1985.

At the meeting with PM Nepal, Bhutanese minister Wangchuk informed PM Nepal the main agenda of the 16th SAARC Summit would be issues related to the climate change and that Bhutan had expected utmost cooperation from Nepal towards this.

PM Nepal urged Wangchuk to take back the Bhutanese refugees as third-party settlements alone would not solve the problem. PM Nepal also pointed out at the increasing suicidal trend among Bhutanese refugees settled in third countries.

In response, Wangchuk told PM Nepal, he would convey the message to the Bhutanese Prime Minister.

Minister Wangchuk, who is also a former PM of Bhutan, arrived in Kathmandu as a special representative of the Bhutanese Prime Minister, Tuesday. nepalnews.com

Nepalnews
Posted by Oh My GOD at 5:45 PM