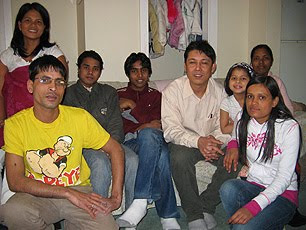 ﻿ Madan Kumar Giri (4th from right), shown here with family and friends, wants to attract more Bhutanese to P.E.I. (Nancy Russell/CBC)
The Bhutanese community on P.E.I. will increase significantly in size this year.

In May 2007 Canada agreed to take in 5,000 refugees who had been living in camps in eastern Nepal since the early 1990s. Last year, more than 40 of them arrived on Prince Edward Island. Another 35 are expected this year.

Madan Kumar Giri and seven members of his family were the first Bhutanese refugees to arrive more than three years ago. They've applied for Canadian citizenship. Giri sends photos and videos back to the refugee camps in Nepal, in the hopes of attracting people to P.E.I.

"We would like to increase the number of Bhutanese immigrants here on the Island, so at least we would have a small Bhutanese community," he said.

The size of the community matters to Citizenship and Immigration Canada as well. Creating a sustainable community for immigrants is a central part of its planning.

"That is a contributing factor and certainly makes it easier for that particular group to settle into the province," said Jon Stone, director of communication for Citizenship and Immigration Canada in the Atlantic Region.

As Canada continues to work towards its commitment of settling 5,000 refugees, more are expected on the Island in 2011.

About 108,000 Bhutanese refugees of ethnic Nepalese descent have been living in seven camps in eastern Nepal since the early 1990s. Canada is part of a group of seven countries taking steps to address this long-standing problem.