Bhutanese in Sydney show their strength on indoor soccer

Posted: 22 Feb 2010 11:33 PM PST
February 23, 2009: Until a year ago, Bhutanese in exile, in whose symbolic shadow we used to stand. September 2008, came as a great beacon light of hope to the thousands of Bhutanese youths who had burn the flame of gender discrimination, deprived from the justice and right they deserved. The day when some of ours feet landed on Australian soil, hopes had finally opened to live a better and a healthier life. They had a dream, a dream to step up with a plea that shall always march ahead and do something progressive in life.

Indoor soccer is a new concept of soccer played inside an enclosed building with the total field area just a bit bigger than a basketball court. Having slightly different rules than we usually play on open field, each team has only five players including a goal keeper. The competitions which run from December 28 2009 to February 7, 2010 brought together 8 teams of Sydney’s different football clubs and communities. Those 8 teams were divided with four teams in each group with both teams from Bhutanese community falling in same. 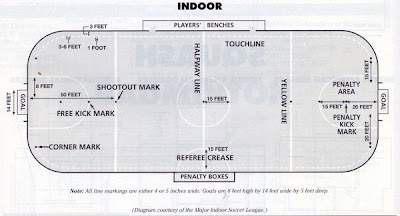 Both Bhutanese teams seemed to be struggling in their first match as they took time in understanding, for they were playing for the first time inside an enclosed premises against highly trained and physically stronger players. But at the end, enthusiasm and passion on soccer was helped both teams to be qualified for the semi finals. Druk FC B lost finals in penalty shootouts to and finish the competition as a runner up. Druk FC A lost the semis and won the 3rd place playoffs 3-2. Kabita Dhungel won the best and fairest players award.

A star female player from A-league club Central Coast Mariners presented the trophy, medals and certificates to the players.

Speaking in the second success of Druk FC girls team, first being success for securing third position in Football United outdoor soccer festival last October, Hemanta Acharya said that the cooperation in the team, passion and support from community members were keys for success.

Hemanta Acharya, who lead ‘Druk FC A’ to the third position is chosen in a 16-member team that is representing Australia as the second team to travel South Africa to play a mini World Cup in June 2010. The 16 member team will be going to the selection after a high level of training with coaches of international level. Eight players will be representing Australia including 4 girls and 4 boys. The competition will be between 32 nations in a same format as of major world cup but players in each team are only 8, with 6 playing including 3 girls in same team.

Similarly Druk FC boys under the captainship of Damber Dhungyel are preparing to face their first soccer match in Australia, Sydney with four other Nepalese Community soccer teams this March. These boys are being coached by ex-football keeper of Bhutan National Team (Druk 11) Tahalman Kharka.